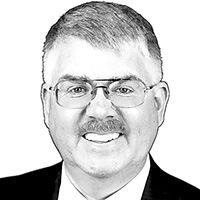 Joel Meeker is a pastor, writer, editor and administrator. He serves as regional director for the French-speaking regions of the Church of God, a Worldwide Association, and as chairman of its Board of Directors.

At age 19, he discovered a love of travel while teaching in Laotian refugee camps in the golden triangle of northern Thailand.

After completing a degree in theology at Ambassador College in Pasadena, California, he married his best friend, Marjolaine—they’ve now been married for over 35 years—and moved to France to begin his pastoral career. They served congregations on the Mediterranean seaboard for three years and in the Alsace-Lorraine region for six. Their two daughters were born during their time in France.

Joel travels internationally half of each year to fulfill his current responsibilities in French-speaking countries around the world. His regular travel destinations include Europe, the Caribbean, sub-Saharan Africa, and the Indian Ocean. As a columnist for Discern magazine, his articles often reflect an international perspective.

A scuba enthusiast, Joel has dived on the Great Barrier Reef, the wreck of the SS President Coolidge in the South Pacific, and dive sites in the Mediterranean, Caribbean, Red Sea and Indian Ocean. He’s an amateur military historian and has guided battlefield tours in several countries of Europe. He also enjoys African wildlife photography.