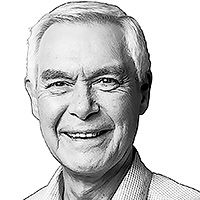 Andre van Belkum currently serves as the pastor of the Church of God, a Worldwide Association, in New Zealand and the Pacific region. Previously he pastored congregations in southern Africa, including South Africa, Zambia, Zimbabwe and Malawi.

He graduated from Ambassador College in Bricket Wood, England, in 1969 and was ordained into the ministry in February 1970. After serving in southern Africa for 40 years he relocated to live and work in New Zealand.

Andre married his beloved wife, Elize, in 1965, and they have three grown children and 10 grandchildren. His wife has been a constant support and help in not only serving their family, but also with church-related activities. This included visiting people under difficult circumstances and in remote regions.

From a young age Andre puzzled over why humans were placed on the earth. Was there a purpose for their existence? While studying at the University of Pretoria, South Africa, he asked three of his professors if they were able to provide an answer. Their responses were vague and ill-defined.

It was at that time that he was offered a booklet produced by the Church of God entitled Why Were You Born? To his surprise, he discovered numerous logical and clearly defined biblical references as to why God created the human race. This truth was one of the motivating factors that led to his making personal contact with the Church of God, and in 1964 he and his wife were baptized .

As someone who enjoys the outdoors, he and his wife meet with friends in order to visit wildlife parks, especially in southern Africa. Hiking and gardening are favorite pastimes, while they both work out in the gym on a regular basis. He keeps abreast of world news, especially as it relates to Bible prophecy. Although he attempts to provide a balanced diet of sermons, he especially takes delight in motivating himself and others to focus on our incredible human potential, and the sure and tremendous promises God has given those who seek and please Him.