Like it or not, today’s children are growing up in a digital and increasingly wireless world. Smartphones, laptops, tablet computers, e-book readers, MP3 players, video game consoles and other electronic devices have become an integral part of their lives—and ours. That’s in addition to “old technology,” such as television, which young and old alike still gravitate to.

And that’s not necessarily bad. The Internet, computer apps, interactive video games and TV programs can all be excellent sources of education and entertainment for children. Communications technology like Skype, webcams, email, Instagram and Facebook can actually augment relationships and help children stay connected to people who care about them—for instance, when grandparents or other relatives live far away.

In balance, technology is certainly useful. The problem is, many children today have strayed beyond a moderate use of electronic devices.

A Kaiser Family Foundation study found that, on average, kids aged 8 to 18 spend practically every waking moment when they’re not in school engaged in entertainment media of some kind—a staggering 7½ hours a day. Somehow in the midst of all this, teens find time for texting. According to Nielsen statistics, teenagers send and receive around 3,700 texts a month, or around 125 each day.

To be fair, parents are often just as absorbed in technology as their children, which only makes matters worse.

“There’s not a lot of time for family members to talk with each other anymore because it’s consumed by all our entertainment devices,” observes Arizona psychologist Lisa Strohman, J.D., Ph.D., director of the Technology Wellness Center and author of Unplug: Raising Kids in a Technology Addicted World (2015). “Even when family members are in the same room together, they’re often all on their own screens, so they’re not really ‘present’ for each other.”

There are other casualties as well. Many believe communication devices can hinder relationships when used too much. “When kids spend more time on social media and texting, rather than talking with others face-to-face, their verbal and interpersonal skills tend to suffer,” warns Wisconsin psychologist Melissa Westendorf, J.D., Ph.D., cofounder of the Technology Wellness Center.

If that wasn’t enough to be concerned about, excessive media use has been associated with physical and behavioral disorders like obesity, myopia, depression, anxiety, insomnia and attention deficit disorder (ADD), all of which are increasing in children.

Of course, the problem isn’t only too much screen time, but also what kids are being exposed to. Much of popular media bombards kids with messages promoting sexual promiscuity and violence, scarring young minds.

Having a Web presence can also expose children to dangers like cyberbullying (bullying that occurs online) and sexual predators. And then there’s “sexting” (sending sexually explicit text messages or photos). A 2014 report by Drexel University found that 54 percent of American teens have sent or received “sext” messages.

Ultimately, it’s up to parents to teach their children to use technology wisely. The Bible states, “Whatever you do, do all to the glory of God” (1 Corinthians 10:31). Living in the 21st century, this would have to include how we use our digital devices.

Here are 10 strategies for guiding your children to use technology in a way that not only keeps them safe, but also pleases God. You can adjust these based on the age and trustworthiness of your child.

The Bible instructs parents to teach and train their children (Deuteronomy 6:7), which includes setting boundaries. Your family’s technology rules should spell out how much “tech time” is allowed for your kids each day; when during the day or week technology is off-limits; and what media programming, games, apps and websites your kids may and may not use.

Some sample rules to consider: No TV, iPods, iPads or cell phones are permitted during homework time. Gaming systems are not to be used for more than one hour a day. Do not download anything without permission. Only one hour of television a day is allowed. No digital devices are allowed during mealtimes.

Ideally, Dr. Strohman says, “set these rules when your kids are young and they’ll be less likely to try and buck the system. But if you have teenagers already, it’s not too late to establish these kinds of guidelines. You just need to sit down with them and tell them you’re going to implement a new family program. They might get upset, but you’re still the parent.” 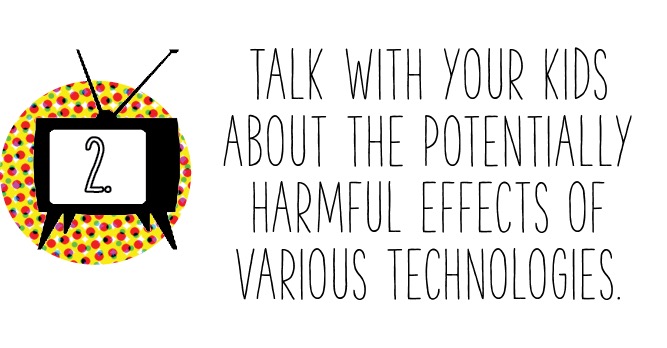 Tell them why it’s not healthy to watch too much television or to be constantly plugged in to technology. Teach them biblical principles to help them understand why particular computer games, websites or movies are not appropriate.

Discuss the potential dangers of online predators and cyberbullying. Impress upon them that they’re leaving behind a digital footprint, so they shouldn’t say anything on electronic media that they don’t want on public record for a long time. This includes an explanation of why it’s not okay to send or receive sexually oriented text messages.

Keep televisions and devices that have Internet access in common living areas in your home (such as the family room) so you can see what your children are viewing and doing and keep tabs on how much time they’re spending.

Before bedtime each night, “your kids’ portable devices—iPads, iPods and smartphones—should be deposited in your bedroom, perhaps plugged into a charging station,” advises Dr. Strohman. “This way your kids will not be tempted to use these devices when they should be sleeping.”

Install filtering software on your computers, smartphones and gaming systems. Or set up parental controls through your Internet service, cable TV or satellite provider, or Web browser (Internet Explorer, Firefox, Safari, Google Chrome, etc.). These filters allow you to restrict your children’s access to particular TV shows, movies, games and websites, and prevent them from using these media at certain times of the day or for longer than you allow.

Don’t let them watch television by themselves just to keep them occupied. If they have an hour of TV time coming, if at all possible, watch it with them. At the end of the program, talk with your children about what they just saw: Were there any moral lessons to be gleaned? What kind of strengths or weaknesses did the characters have? Did their actions reflect good values?

If something questionable comes up during a program, don’t be shy about offering your comments right then. “Co-viewing,” as this is often referred to, can be an effective way of filtering what kinds of ideas come into your home and being aware of what your children are exposed to.

Familiarize yourself with their favorite apps and websites. If your kids have social media accounts, get your own profile and “friend” them so you can see their posts. Some experts suggest installing monitoring software to track your children’s Internet activity.

Some of these steps may sound drastic today, but you don’t have to sneak around. You can be open about it. You need to know what your children are communicating and viewing online so you can protect them. 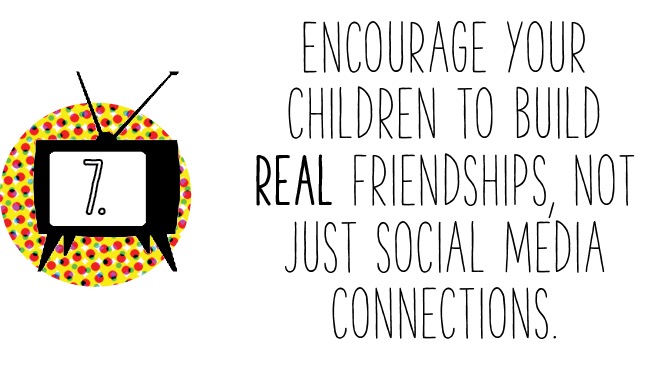 Don’t allow your children’s digital contact to become a substitute for in-person contact. This is important, Dr. Westendorf says, because “our emotional attachments and empathy building to others is better formed in face-to-face encounters than on a computer screen. Children need to experience real physical touches, hear real voices and see real people’s faces.”

Set time aside each week to do something as a family without mobile phones or other electronic devices. Plan a game night with interactive board games, play a game of soccer or go bike riding together, take up some hobbies as a family (crafts, cooking, bowling, etc.), or plan a family outing (to the zoo, museum, playing field, park, hiking trails, community recreation center, etc.). Encourage your children to participate in sports, clubs, church activities or volunteer programs to direct their attention toward something other than electronics.

Your children are going to note your example. So if you don’t want them to watch violent movies, spend hours every night aimlessly surfing the Web or use their phones at the dinner table, you shouldn’t do these things either.

“If you say one thing and do something else, you’ll never win,” Dr. Westendorf says. “But if you do the same things you tell your kids to do, they’re more likely to go along with it.”

Your children are likely to be misusing technology if they:

If you notice any of these behaviors, you may need to remove all technology and get help from your minister, a family counselor or other professional.

To sum up, digital media, like so many things in life, is not something that’s inherently good or bad, but it can be misused and overused. It’s the job of parents to help their children make the right choices so they can enjoy the benefits technology has to offer, while avoiding the traps of technology that can harm their relationships and health.

Fill out the form below to start your subscription.