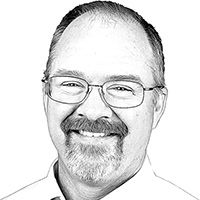 Tom Clark married his lovely wife, Mary, in 1985. They have three grown children and four grandchildren. Tom was ordained a minister in 1989 and has served congregations in Georgia, Oklahoma, Texas, Missouri, Kansas, Minnesota and North Dakota. He currently pastors the Bentonville, Van Buren and Mena, Arkansas, congregations of the Church of God, a Worldwide Association.

In addition to his pastoral responsibilities in the United States, he serves overseas as the senior pastor for congregations in Ghana and Nigeria in West Africa, where he has been traveling since 2006. He usually travels to Africa for pastoral visits three times a year, spending roughly five to six weeks there throughout the year.

In his speaking, he often focuses on the themes of knowing what you believe and why you believe it, as well as the vital importance of prayer, Bible study, fasting and meditation in a Christian’s life. He also serves on the team that answers questions readers send to Life Hope & Truth.

His hobbies include spending time with his children and grandchildren, reading, and outdoors activities like bow hunting and fishing.