If God is good, how can we explain evil? From the Holocaust to the senseless slaughter of school children, evil permeates our world. Is God responsible?

When you read about school shooters killing innocent children, suicide bombers blowing up hundreds of innocent passersby, violent regimes maiming and murdering their political opponents, or arsonists causing the tragic deaths of a young family, do you ever ask yourself, “Where is God in all of this?”

As children, many of us learned a song titled “He’s Got the Whole World in His Hands.” However, when we see the evil, the sadness and the suffering that, at times, seem to surround us on every side, we might wonder about that premise. For if this really is God’s world and if He really has the whole world in His hands, how do we explain these horrible events?

Is He powerless before these evil forces and actions? If He really does have the whole world in His hands, it would appear that He has dropped it on numerous occasions.

What is the answer to the perplexing problem of evil?

The god of this world

As is the case in so many situations like this, men have assumed that the Bible says something it really doesn’t. For instance, how many realize that, according to the Bible, Satan is the god of this world? So states the apostle Paul in 2 Corinthians 4:4.

From the very beginning, Satan the devil (identified by Jesus Christ as the father of liars and a murderer from the beginning—John 8:44) has sought to destroy what God created and established.

He was the snake who lied to Eve and encouraged her to ignore God and partake of the tree of the knowledge of good and evil. This eventually led to the expulsion of Adam and Eve from the Garden of Eden and the severing of mankind’s direct relationship with his Creator.

Satan’s position as the god of this world was challenged by the birth of Jesus Christ, and Satan sought to murder Him shortly thereafter. Joseph and Mary took their young Son and fled to Egypt to escape Herod’s decree that all male children 2 years old and under who were born in the region of Bethlehem during the approximate time of Christ’s birth be put to death.

The kingdoms of this world reflect Satan

Consider also the temptation of Christ by Satan as he confronted Him in the wilderness (Matthew 4). In his final attempt to conquer Christ, Satan took Him to the top of a high mountain and showed Him all the kingdoms of the world and their glory. Then he said to Him, “All these things will I give You if You will but bow down and worship me.”

Of course, Christ did not succumb to that temptation, but the point is this: All the kingdoms of the world were Satan’s to give! He’s the god of this world, the author of confusion, the father of liars, a thief and a murderer, and so this world reflects the nature of its god or ruler, Satan the devil. He is “the prince of the power of the air, the spirit who now works in the sons of disobedience” (Ephesians 2:2).

It was Satan who stirred up the religious leaders of Christ’s day to say and do whatever was necessary to have Him crucified. As was prophesied in Genesis 3:15, “He [speaking of Christ] shall bruise your [Satan the serpent’s] head, and you [Satan] shall bruise His heel.”

Is this why, in the sample prayer that Jesus Christ gave to His disciples (Matthew 6:10), we find Him encouraging them to pray, “Your kingdom come. Your will be done on earth as it is in heaven”?

Try to imagine the impact upon the entire world when, upon Christ’s return, Satan is bound and his evil influence is eliminated for 1,000 years!Does this mean that for now God has allowed Satan to have control over the earth and that the Kingdom of God has yet to come? That’s precisely what it means!

Try to imagine the impact upon the entire world when, upon Christ’s return, Satan is bound and his evil influence is eliminated for 1,000 years (Revelation 20:2)! Human beings will live under the authority of Jesus Christ as He establishes God’s Kingdom on earth. The world will literally be transformed, with peace, prosperity and joy filling the earth. Satan’s spirit of contention, strife and hatred will be replaced by the fruit of God’s Holy Spirit, poured out on all flesh (Joel 2:28).

According to God’s plan, Satan will be loosed for a short season following the Millennium and will quickly rally human beings to do battle against God (Revelation 20:8). His influence will be short-lived, however, and this time Satan will be restrained forever from influencing others.

The end of evil

Notice where God’s plan will eventually lead when all who have been granted salvation are spirit members of God’s family, and Satan is not able to wield his malign influence anymore:

“And I heard a loud voice from heaven saying, ‘Behold, the tabernacle of God is with men, and He will dwell with them, and they shall be His people. God Himself will be with them and be their God [for the first time!]. And God will wipe away every tear from their eyes; there shall be no more death, nor sorrow, nor crying. There shall be no more pain, for the former things have passed away’” (Revelation 21:3-4).

Christ withstood the temptations of the god of this world. As the Lamb of God, He willingly sacrificed Himself for the sins of all mankind, died and rose again, and then ascended to His Father’s throne. Christ is now seated at the right hand of the Father and will return to this earth to rule over it as King of Kings and Lord of Lords, overthrowing and imprisoning the god of this world.

When that happens, He will indeed “have the whole world in His hands” and the problem of evil will be on its way to resolution—forever!

Learn more about this in the related article “Why Does God Allow Suffering?” 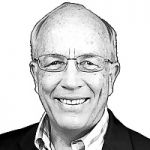 Ken Giese is a church pastor in the Fort Worth, Texas, area. In addition to his pastoral duties, he is the director of a preteen camp and an instructor at Foundation Institute, the educational arm of the Church of God, a Worldwide Association, where he teaches a class on the Former Prophets.