What is a Nazirite, and was Jesus Christ living under this vow? What is the difference between a Nazirite and a Nazarene? And what difference does it make?

There seems to be some confusion concerning whether Jesus Christ was born to live His life as a Nazirite. There is also confusion about what a Nazirite vow is. Of course, it is also worth considering, What difference does it make whether He was or wasn’t under a Nazirite vow?

Is the belief that Jesus was under a Nazirite vow the reason so many artists portray Him with long hair? But would there be a problem with the description of His actions in the Gospel accounts if Jesus were to have lived as a Nazirite?

First, let’s find out exactly what a Nazirite vow is according to the Bible. The term describes a type of vow either a man or woman could make before God. It could be in effect for various lengths of time, depending upon the person making the vow.

The first reference to this subject is found in Numbers 6, where the rules for the Nazirite (spelled Nazarite in the King James Version) vow are explained. God lists some restrictions of food, drink and personal grooming. Those under a Nazirite vow were prohibited from:

Consider an example of a man under a Nazirite vow in the Bible. Though it seems the Nazirite vow was mainly designed to be taken for a limited time, this man was to be a lifelong Nazirite.

Samson lived his whole life under the Nazirite vow

Samson was set apart by God from birth to be under this vow. His story is told in the book of Judges chapters 13-16. His birth and dedication to God for his whole life through the Nazirite vow is found in Judges 13:7. You can read the entire chapter to see God’s instructions to Samson’s parents.

Samson was not just a regular Nazirite. God chose him to be a judge in Israel. He was the strongest man of his day; God gave him supernatural strength so he could deliver Israel from oppression by the Philistines. When Samson told Delilah the secret of his strength (that his hair had never been cut), she tricked him. She had his hair cut off, and Samson lost his strength. The vow had been broken (Judges 16:17-20).

Was Jesus living under a Nazirite vow?

What about Jesus? If He had been under a Nazirite vow, He would have followed the rules of the vow. Did He?

Jesus was from the town called Nazareth. That’s why He was called a Nazarene. It had nothing to do with the Nazirite vow.We read many times in the Gospels about Jesus drinking wine. For example, at His final Passover He blessed the cup of wine and shared it with His disciples. Then He said, “Assuredly, I say to you, I will no longer drink any of the fruit of the vine until that day when I drink it new in the kingdom of God” (Mark 14:25, emphasis added; see also our article “Passover Wine or Grape Juice”). Because He drank wine, Jesus was even accused by the Pharisees of being addicted to wine, though that was not true (Matthew 11:19).

And the Bible nowhere says that Jesus had long hair. For more about the physical appearance of Jesus, please read “What Did and Didn’t Jesus Look Like?”

From these examples, we see that Jesus was not under the Nazirite vow.

A Nazarene is not the same as a Nazirite

Part of the confusion comes from a similar sounding word used in Matthew 2:23.

When Jesus was young, His parents brought Him back from Egypt. His father “came and dwelt in a city called Nazareth, that it might be fulfilled which was spoken by the prophets, ‘He shall be called a Nazarene.’”

The truth of the matter

It makes all the difference in the world! Had Jesus been under the Nazirite vow, then the things He did would have violated the terms of the vow. Purposefully breaking the vow would have disqualified Him from being the “Lamb of God” (John 1:29, 36). But we know this wasn’t the case. He challenged His detractors to find any sin in Him, and they could not (John 8:46). If He had been under a Nazirite vow and broken it, they most surely would have accused Him.

He was Jesus of Nazareth. Jesus was a Nazarene (from Nazareth). He was not a Nazirite.

Other Nazirites in the Bible?

Though there were surely other Nazirites in the Bible, the word Nazirite only appears in Numbers 6 and Judges 13 (about Samson). Becoming a Nazirite was a major commitment and it was not required, so the vow was likely taken in serious situations or to express deep devotion.

The Bible gives this warning about vows in general:

“When you make a vow to God, do not delay to pay it; for He has no pleasure in fools. Pay what you have vowed—better not to vow than to vow and not pay” (Ecclesiastes 5:4-5).

The word vow is only mentioned twice in the New Testament: about Paul (Acts 18:18) and about four men that Paul paid expenses for when they completed their vow and had their heads shaved (Acts 21:23). These may have been Nazirite vows.

Was John the Baptist a lifelong Nazirite? The Bible only says that he was to “drink neither wine nor strong drink” (Luke 1:15). It does not say whether he fulfilled the other requirements of the Nazirite vow (letting his hair grow and abstaining from touching dead bodies). For more about this, see “Elizabeth, Mother of John the Baptist.”

Christians today are to heed Jesus’ instructions to “not swear at all: neither by heaven, for it is God’s throne; nor by the earth, for it is His footstool; nor by Jerusalem, for it is the city of the great King. Nor shall you swear by your head, because you cannot make one hair white or black. But let your ‘Yes’ be ‘Yes,’ and your ‘No,’ ‘No.’ For whatever is more than these is from the evil one” (Matthew 5:34-37; see also James 5:12). 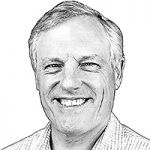 Gary McConnaughey has been married to his wife, Jane, more than 48 years and has three children and seven grandchildren. He was baptized in 1971 and ordained an elder in 1990. He became a pastor in 2002.