into God & the Bible

The Law: A Reflection of God’s Character

There is much misunderstanding about God’s law. Some feel all or parts of it are irrelevant today. But understanding what the law is shows we must keep it.

The subject of God’s law is controversial among the churches that call themselves Christian. In the professing Christian world, there is much confusion and division about God’s law. Some churches reject the law wholesale, while others reject portions of it. Here are some arguments people use to say the law is irrelevant today:

This list could continue with many similar arguments against God’s law. These reasons all have one thing in common: They teach that the law has no purpose in a Christian’s life. But is this true? Or is there a purpose for the law that is far greater than many realize?

By internalizing and keeping the law of God, we become more like God every day.The Bible’s description of God’s law

A study of the Bible shows that God’s law is described very positively in both the Old and New Testaments. In fact, there are whole passages that are about the many benefits of the law. (Read Psalm 119, for example.)

But what is fascinating when you study God’s law is that many of the characteristics of the law found throughout the Bible actually correspond to characteristics used to describe God. Notice this chart: 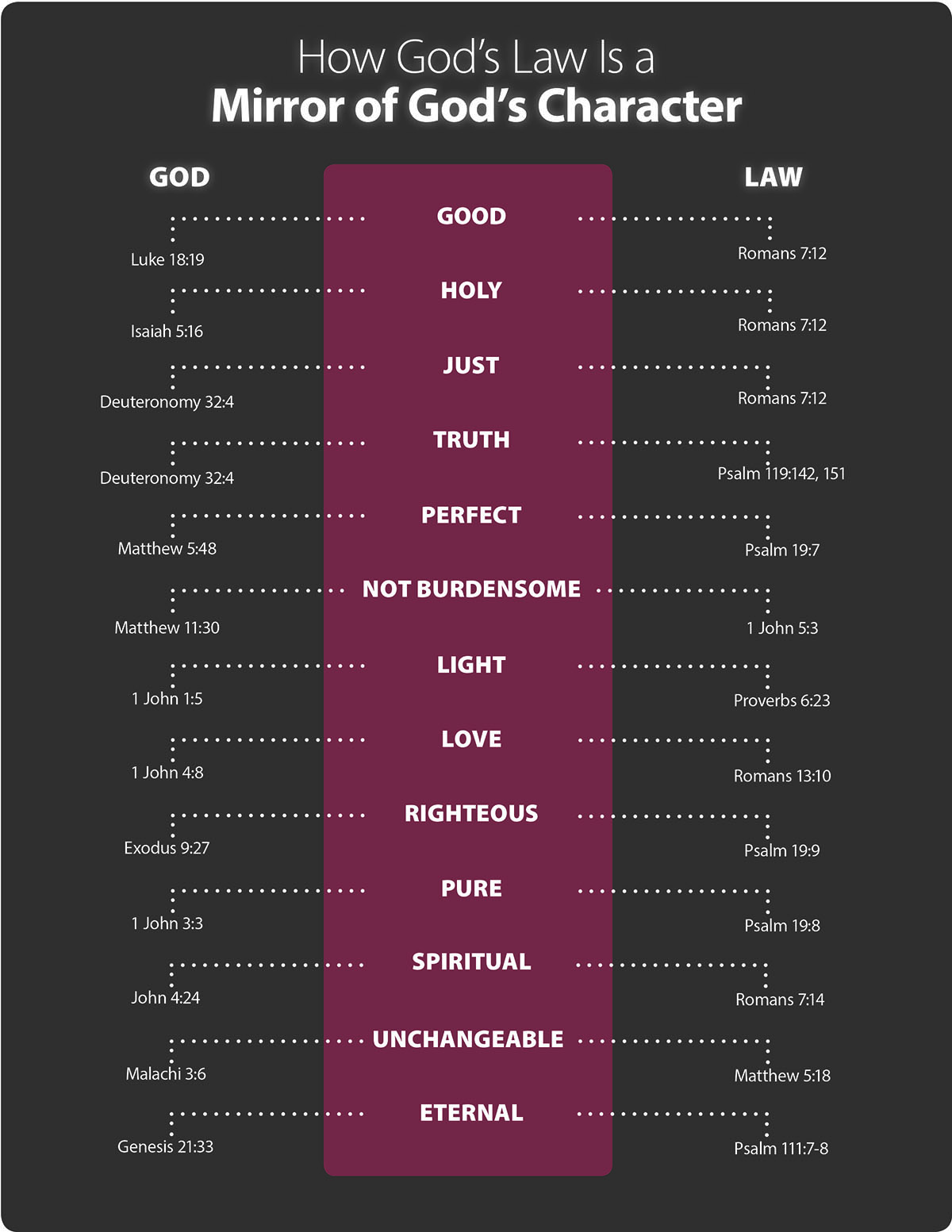 Why would the Bible use so many of the same characteristics to describe both God and the law? Is there something important we can learn from this?

The law is a mirror of God’s character

We could think of the law as a mirror of God’s character.

The apostle James uses the analogy of a mirror to describe God’s law. He compares “a man observing his natural face in a mirror” to “he who looks into the perfect law of liberty” (James 1:23, 25). Just like a mirror reveals dirt on our face, so, too, the law reveals our sins—the areas where we fall short of thinking and acting like God (Romans 7:7).

This analogy reveals something the law was not designed to do (which many incorrectly claim does away with the law): The mirror (the law) cannot clean the dirt (our sin). Only the forgiveness of God through Jesus Christ’s sacrifice can wipe away our sins!

Another thing the mirror (the law) was not designed to do is to keep us clean. It defines what clean is! But, thankfully, under the New Covenant God has a way to do this: “This is the covenant that I will make with them after those days, says the Lord: I will put My laws into their hearts, and in their minds I will write them” (Hebrews 10:16).

The New Covenant promises that the law (God’s character) will be written on the hearts and minds of Christians through the Holy Spirit (Ezekiel 36:27; 1 Corinthians 2:11)!

The character of God

God’s very own character is revealed in His law. Consider some of the things that the 10 Commandments reveal about God’s character: 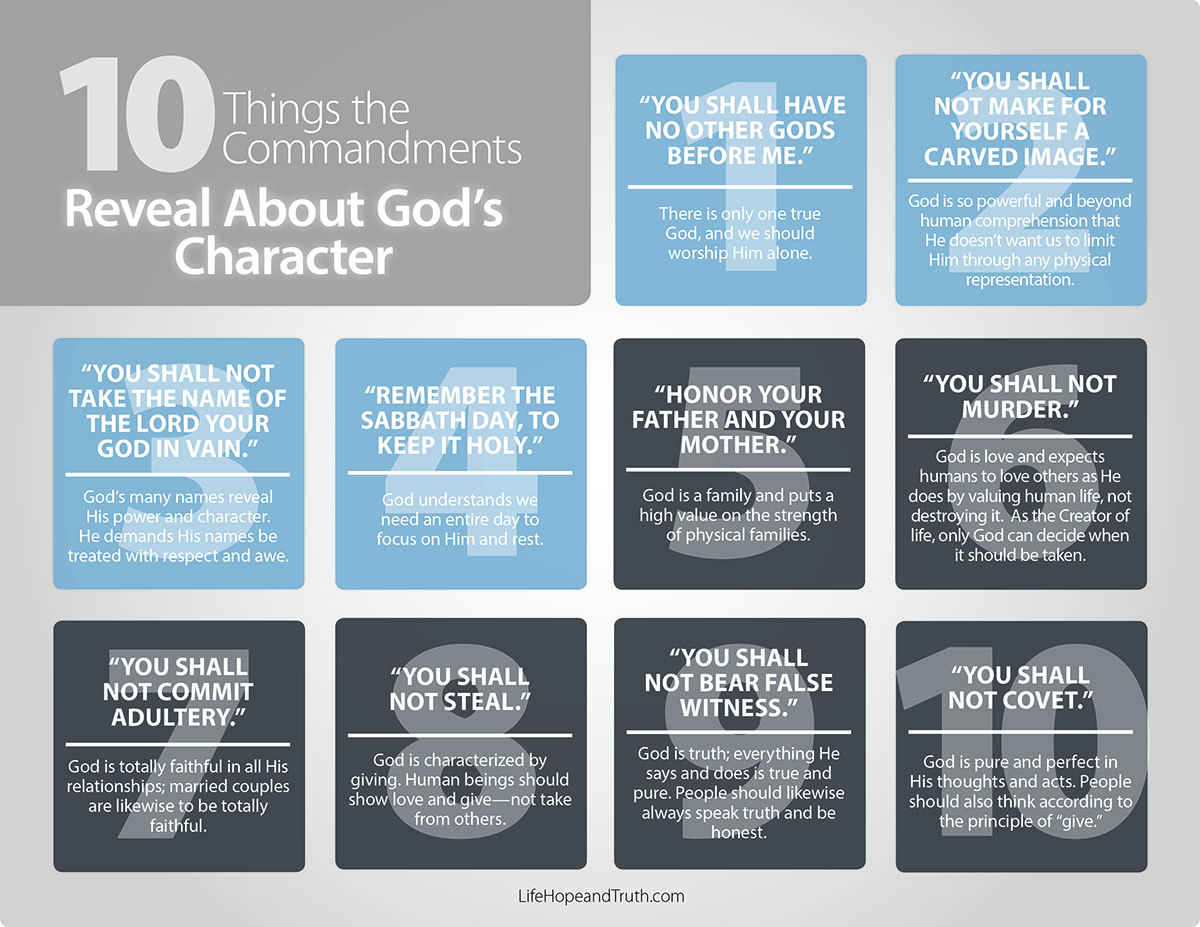 The Bible is very clear that Christians are to become godly—like God (Matthew 5:48; 1 John 2:6). He has not left us in the dark about how to be like Him. By internalizing and keeping the law of God, we become more like God every day.

It’s time to cast off preconceived notions of God’s law and see what the Bible says.

Isaac Khalil is husband to his lovely wife, Natasha, and father to son, Eli and daughter, Abigal. He loves to spend time with family and friends doing various things like watching movies, playing chess, playing board games and going out. He enjoys studying biblical topics and discussing the Bible with his friends. He is also a news junkie and is constantly reading and sharing news connected with Bible prophecy.