The four Gospels are very clear that Jesus’ primary message was about the Kingdom of God. Yet why is it so hard to find Jesus’ message in today’s Christianity?

The myriad of churches that make up Christianity profess that their religion is based on Jesus Christ. Nearly all claim Him as their founder and say that their teachings are based on what He said and did 2,000 years ago. But, sadly, there are many doctrines where mainstream Christianity ignores or actually rejects the teachings of Jesus Christ.

One major example of Christianity ignoring something Jesus plainly taught is His central message.

Here is a bold assertion: Mainstream Christianity almost entirely ignores the core message Jesus Christ brought when He walked the earth 2,000 years ago. But what was Jesus’ message?

His core message was the Kingdom of God.

He pinpointed this central message in the heart of His most famous sermon—the Sermon on the Mount. He made a statement about what should be the highest priority for His followers: “But seek first the kingdom of God and His righteousness, and all these things shall be added to you” (Matthew 6:33, emphasis added).

What is the gospel?

Gospel is a common word in the Christian world. Some think of it in connection with a genre of religious music, but in the Bible the word gospel describes a message. It literally means a message of good news.

Most churches include the word gospel in their mission statements. Typically, the gospel is described as the gospel of Jesus Christ, and it is seen as the message of His life, death and resurrection. (You can see this by doing a Google search of the mission statements of different denominations of Christianity.)

But was this the central message that Jesus actually taught? Was His message only about Himself?

A study of the Gospel accounts of Christ’s life pinpoints exactly what His message—His gospel—was all about!

Notice Mark 1:14: “Now after John was put in prison, Jesus came to Galilee preaching the gospel of the kingdom of God.” That statement is pretty plain—Jesus preached the gospel about the Kingdom of God!

There are many scriptures that reinforce this fact. For example, Matthew 9:35 says, “Then Jesus went about all the cities and villages, teaching in their synagogues, preaching the gospel of the kingdom.”

At one point in His ministry, Jesus was about to leave an area where He had been preaching for some time. The people of that area tried to persuade Him not to go (Luke 4:42). Jesus’ response was, “I must preach the kingdom of God to the other cities also, because for this purpose I have been sent” (verse 43).

Let that sink in.

Jesus Christ said that one of His primary purposes for coming to earth was to preach about the Kingdom of God! That was His gospel. That was His message. That was His purpose. That is what drove and motivated Him.

What was Jesus’ message? It was a message about the literal establishment of the Kingdom of God on earth at the second coming of Jesus Christ. See our infographic on this page to learn more details about what the Kingdom of God is.

Christians who seek to follow Jesus Christ’s footsteps should make the Kingdom of God as high a priority in their lives as it was in Christ’s life. Jesus came to set us an example of how to live. He then died for our sins and was resurrected so we can have an opportunity to be in the Kingdom of God.

But where is that message in mainstream Christianity today? 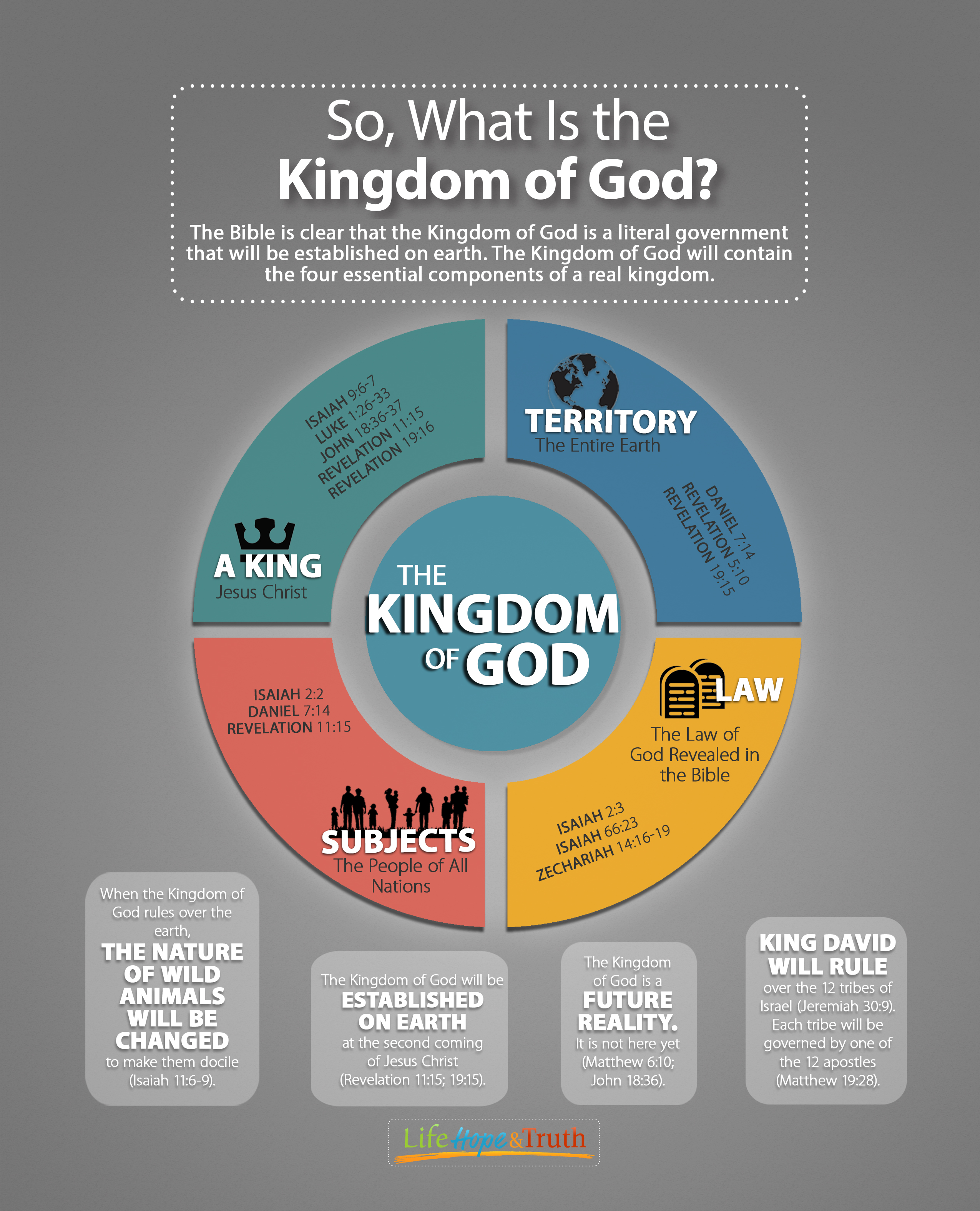 After Christ was resurrected and ascended to heaven, He founded a Church. The purpose of that Church—that called-out group of people—was to carry on the work He did while on earth. Christ commissioned His Church to go into the entire world and preach the same message that He preached while He was on earth (Matthew 24:14; 28:19-20; Mark 16:15; Acts 1:3-8).

Jesus Christ’s words are clear—the Kingdom of God is to be the No. 1 focus and emphasis in the lives of His followers. In fact, it was the core of His gospel message. But as the first century progressed, the intense focus on the Kingdom began to wane as false beliefs began to creep into Christianity. The apostle Paul wrote that he perceived Christians in his time were “turning away” from the true gospel to “a different gospel” (Galatians 1:6).

The understanding of the true gospel and the focus on the Kingdom of God were minimized and lost over the centuries after the end of the New Testament era.

A key factor in this was Emperor Constantine’s acceptance of a popular form of Christianity and its subsequent adoption as the official religion of the Roman Empire.

Historian Justo Gonzalez writes: “Since the time of Constantine, and due in part to the work of Eusebius and of many others of similar theological orientation, there was a tendency to set aside or to postpone the hope of the early church, that its Lord would return in the clouds to establish a Kingdom of peace and justice. … Eusebius, although more articulate than most, was simply expressing the common feeling among Christians, for whom the advent of Constantine and of the peace he brought about was the final triumph of Christianity over its enemies” (The Story of Christianity, Vol. 1, pp. 134-135).

This idea was also promoted by the theologian Augustine of Hippo in his highly influential book The City of God: “Therefore the Church even now is the kingdom of Christ, and the kingdom of heaven” (Book XX, Chapter 9).

This belief became known as amillenialism and is a dominant belief (in different forms) in mainstream Christianity today.

Amillenialism is the belief that there is no literal 1,000-year reign of the Kingdom of God on earth, but that Jesus is presently reigning over the earth through the Church. This was one of the major teachings that replaced Jesus’ true gospel throughout large portions of Christianity.

To learn more about what the Bible actually says about the Kingdom of God and the Millennium, read our article “1,000 Years—the Millennium.”

After the true biblical teaching of the Kingdom of God was removed, the gospel message was changed from the message about the Kingdom to a message primarily about Jesus Christ. In other words, Christianity kept the name of Jesus Christ, but abandoned His message.

Jesus was very clear that professing His name but ignoring His teachings is false worship (Luke 6:46). He wants His people to worship Him in “spirit and truth” (John 4:24).

The true gospel message of Jesus Christ is not a minor issue. As we have already read, Jesus connected a belief in the true gospel to repentance (Mark 1:15), and the apostle Paul warned that preaching a different gospel brings a curse (Galatians 1:8-9). Believing the true gospel is vital to your salvation!

The true gospel is the message of good news about the coming Kingdom of God. It is a message of hope—for this entire world and for you and your family. It is the message that God is building a family that will soon rule the entire earth, bringing peace and happiness.

The established Christian churches have lost that true gospel message. Discern magazine and the Life, Hope & Truth website exist to continue the proclamation of the true gospel. Even though we are a minority voice in the world of religion, we are dedicated to teaching the same message that Jesus Christ taught.

You need to learn more about that true gospel message. We recommend reading our booklet The Mystery of the Kingdom.