100 Years Since the Treaty of Versailles

On June 28, 1919, the signing of the Treaty of Versailles officially ended World War I. But why did the treaty ending the “war to end all wars” fail to prevent all war?

On Nov. 11, 1918, Europe lay in exhausted ruin. That was the day an armistice ended the fighting that had devastated the continent. Millions were dead. Confidence in humanity’s ability to maintain a peaceful world order was badly damaged.

In January 1919 the victorious powers convened at the Paris Peace Conference in an attempt to fashion an outline for peace. A treaty with a defeated Germany was the overt reason for the gathering, but much more had to be decided, including redrawing the map of Europe in the wake of the Ottoman Empire’s disappearance and addressing U.S. President Woodrow Wilson’s famous “Fourteen Points.”

With its appeal to national self-determination and a call for establishing a “League of Nations,” Wilson’s ambitious outline for a new order dominated much of the discussions. The “big three” of Wilson, British Prime Minister David Lloyd George and French Prime Minister Georges Clemenceau, surrounded by numerous other heads of state and international luminaries, descended on the French city to work on the creation of the postwar world.

Almost six months later, after interminable wrangling and attempts to consider the input, demands and outcries from scores of competing bodies (notably absent was any significant German participation), a treaty was signed.

But the peace did not hold.

Twenty years later, in September 1939, a remilitarized Germany under Adolf Hitler invaded Poland and plunged Europe back into war. More subtly, other national “repairs” instituted in the treaty dragged out even longer. The 1919 creation of the nation of Yugoslavia, supported by the peacemakers, finally came unraveled in the 1990s with wars in Slovenia, Croatia, Bosnia-Herzegovina and Kosovo. A fifth war in Macedonia was barely averted. The term Balkanization entered the political lexicon.

But perhaps most shocking of all was the fact that the U.S. Senate never formally ratified the treaty. The United States never joined President Wilson’s brainchild, the League of Nations, very likely sounding its death knell before it even began.

The world didn’t appear to be safe for much of anything or anyone, let alone democracy.

“Even then, they sensed that they were laying the seeds for future problems. ‘I cannot say for how many years, perhaps I should say for how many centuries, the crisis which has begun will continue,’ predicted Georges Clemenceau, whose own behavior contributed to the failure. ‘Yes, this treaty will bring us burdens, troubles, miseries, difficulties, and that will continue for long years’” (p. ix).

The big question is, Why?

Perhaps the answer lies in asking more questions. Has human nature changed? And does it play out differently on a national or even international scale compared to how it operates in individuals?

In his classic text on international relations, Politics Among Nations: The Struggle for Power and Peace, Professor Hans J. Morgenthau wrote: “Human nature, in which the laws of politics have their roots, has not changed since the classical philosophies of China, India, and Greece endeavored to discover these laws” (fourth edition, 1967, p. 4).

The professor really answered both questions at once! No, human nature has not changed, and no, it doesn’t take a different form for large groups of humans (like nations), compared to individuals.

The Bible, which is an even more trustworthy source on human nature, says the same thing.

Why the treaty didn’t bring peace

At Versailles, the competing interests could not all be accommodated. Each nation (or ethnic group) was motivated by its own interest. Despite such high-flown sentiments as “the war to end all wars” being circulated, it became clear early in the proceedings that many would be disappointed—some to the point of smoldering resentment.

So, no, the world was not “made safe for democracy.” Barely 20 years after the Paris Peace Conference ended, an even more destructive conflict erupted—this one ending in the shadow of a mushroom cloud as the world entered the nuclear age.

Barely 20 years after the Paris Peace Conference ended, an even more destructive conflict erupted—this one ending in the shadow of a mushroom cloud as the world entered the nuclear age.God’s Word could have told humans as much. Isaiah 59 reveals that mankind would continue on the path of violence, war and total inability to find peace:

These are all apt descriptions of the failed attempts to build a peaceful world in 1919—despite well-intentioned efforts.

Isaiah 59:5 almost sounds like a prophetic description of the events in Germany during the 1920s and 1930s, as Adolf Hitler maneuvered his way into the chancellorship, and finally supreme power following President von Hindenburg’s death. His book, Mein Kampf (“My Struggle”), which he wrote while serving jail time for his part in the failed 1923 “Beer Hall Putsch,” foreshadowed how one man’s demented thinking could transform a nation and a world.

Isaiah’s words were eerily accurate in foretelling Hitler’s brooding and blaming: “They hatch vipers’ eggs and weave the spider’s web; he who eats of their eggs dies, and from that which is crushed a viper breaks out” (Isaiah 59:5).

So what is the answer?

Humanity’s problems are not just physical, but are also spiritual in nature. We operate on a level vastly superior to all other creatures, but we are seemingly unable to use our superior intellect and reasoning skills to attain peace and real cooperation with one another.

Even though we are capable of doing enormously good and productive things, we continually show we can’t master the most basic of all things: loving and cooperating with each other.

So is there no hope?

Thankfully, that’s not the end of the matter.

Isaiah went on to point to a clue: “‘As for Me,’ says the LORD, ‘this is My covenant with them: My Spirit [which] is upon you, and My words which I have put in your mouth, shall not depart from your mouth, nor from the mouth of your descendants … from this time and forevermore’” (Isaiah 59:21).

In the future, God will put His Spirit into all human beings—and the result will be incredible changes to how human beings interact with one another. If those involved in peace conferences in this age all used God’s Spirit to find mutually beneficial solutions to our problems, we could have peace today.

Once nations (beginning with the individual humans within them) are given access to God’s Holy Spirit and are freed from the unseen tyranny of Satan the devil (2 Corinthians 4:4; Ephesians 2:2), they will learn to find peaceful answers to their differences.

Answers that don’t lead to war.

Once more, Isaiah speaks: “They shall beat their swords into plowshares, and their spears into pruning hooks; nation shall not lift up sword against nation, neither shall they learn war anymore” (Isaiah 2:4).

There is a time coming when those words won’t just grace a statue in front of the United Nations building in New York City, as they do now. They will form the basis of a new world, built on the principles that lead to peace. 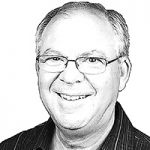 Doug Johnson and his lively, lovely wife, Janel, enjoy spending time with their children and grandchildren.