A Lesson From Nicodemus: Are You Living in Light or Darkness?

What does it mean to live in light or darkness? What can we learn about the difference between light and darkness from the example of Nicodemus?

Nicodemus was a Pharisee and a leader, described in the Bible as a “ruler of the Jews” and “teacher of Israel” (John 3:1, 10; see “Nicodemus the Pharisee”).

Jesus often clashed with the Pharisees due to their hypocrisy and rigid, man-made traditions. Christ even called them blind (Matthew 23:16, 24), meaning they could not see, or perceive, spiritual truth. They walked in darkness. The paradox was that these same Pharisees liked to do their good deeds in the light so they could be seen by others and appear righteous (Matthew 23:5-7). Jesus warned against such behavior (Matthew 6:1-6).

Considering that the Pharisees largely walked in darkness, it’s interesting that the first recorded encounter between Nicodemus and Jesus occurred in the darkness of night (John 3:2).

Nicodemus probably feared what his fellow Pharisees would do to him if they discovered that he had met with Jesus. He likely feared being removed from the synagogues (John 9:22; compare John 19:38) and came to Jesus at night to avoid having anyone see him.

Amazingly, this Pharisee acknowledged that Jesus was “a teacher who has come from God” (John 3:2).

What does it mean to live in the darkness?

Christians are called to follow the light and not the darkness. Light and darkness describe two different ways of life. The righteous walk in the light, but the wicked walk in darkness (Proverbs 4:18-19).

There are two paths we can take in life. Will we choose the light or the darkness?Jesus called the Pharisees blind and hypocrites because they taught God’s law but didn’t follow it. They were outwardly righteous to men, but inwardly full of lawlessness (Matthew 23:26-28). They knew the right way, but did not follow it in their actions (verses 2-3).

They were blind primarily because they thought of themselves as righteous and could not see their sins (John 9:41; compare Luke 18:10-14).

The fact that the terms blind and hypocrites are used to describe Pharisees should cause us to pay attention to what Jesus was saying. There are two paths we can take in life. Will we choose the light or the darkness?

What does it mean to live in the light?

Since Nicodemus came to Jesus in the darkness, it’s no surprise that Jesus chose to discuss spiritual darkness and light with him. He said:

It isn’t enough to know the truth. To walk in the light, we must also do the truth. The apostle James emphasized that true believers are “doers of the word” (James 1:22-25).

In the Bible’s second account of Nicodemus, he defended Jesus before the Pharisees by calling them out on how they practiced their own law.

The Pharisees had asked some “officers,” or temple guards, about why they hadn’t brought Jesus to them. The guards replied, “No man ever spoke like this Man!” (John 7:46).

The Pharisees then proceeded to accuse the guards of being deceived and asked a question with Nicodemus present: “Have any of the rulers or the Pharisees believed in Him?” (implying that Jesus had no legitimacy if not endorsed by the religious elite). They went on to accuse the crowd listening to Jesus of being ignorant of the law and accursed (verses 48-49).

Did Nicodemus finally step into the light? Did he ever acknowledge Christ was God in the flesh and commit his life to walking in the light? The Bible doesn’t say. But instead of just going along with his peers, Nicodemus called them out on their hypocrisy. He pointed out, “Does our law judge a man before it hears him and knows what he is doing?” (verse 51).

The Pharisees responded by attacking Jesus’ legitimacy based on His upbringing in Galilee, arguing that no true prophet could possibly come from Galilee (verse 52). As humans often do, they resorted to ad hominem attacks instead of listening to Nicodemus.

At this stage the Bible does not record that Nicodemus gave a further defense of Jesus. He certainly dared not repeat what he had told Jesus: “We know that You are a teacher come from God; for no one can do these signs that You do unless God is with him” (John 3:2).

The lesson: choose the light

Jesus said that He is the light of the world and those that follow Him should not walk in darkness (John 8:12, 36).

Did Nicodemus finally step into the light? Did he ever acknowledge Christ was God in the flesh and commit his life to walking in the light? The Bible doesn’t say. All we know is that Nicodemus was a disciple who kept it secret for fear of the Jews.

Jesus said that many are called but few are chosen (Matthew 22:14). We don’t know if Nicodemus was ever counted among “the chosen.”

Will you let fear of what others may think stop you from stepping out of darkness and fully committing to the light? Jesus taught that following Him required full commitment, a commitment that had to come even before family (Matthew 10:37).

God has set two ways of life before us, leaving us to make a vital choice: “See, I have set before you today life and good, death and evil, in that I command you today to love the LORD your God, to walk in His ways, and to keep His commandments” (Deuteronomy 30:15-16).

If God is calling you today, will you fully commit to doing as He commanded and walking in the light? 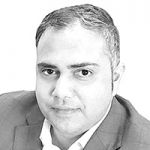 Geoffrey Yunus lives in New Zealand with his wife, Komal, and two children. He was born in Fiji and lived much of his life there before moving to New Zealand.