People pray many different ways across the various denominations of Christianity. How do you pray? How did Jesus pray? What did Jesus say about prayer?

Most would agree that one of the basic elements of Christianity is prayer.

But when you survey the wide variety of forms of Christianity, you find that there are many different practices and ideas about prayer. Consider:

Though the way people pray varies within mainstream Christianity, all major branches frequently pray “the Lord’s Prayer” found in Matthew 6:9-13. Catholics, Orthodox and Protestants will pray the Lord’s Prayer many times throughout their lives because they believe that Jesus instructed His followers to pray this prayer verbatim.

But is this what Jesus Christ intended when He taught His disciples about prayer in the Sermon on the Mount? What did Jesus really teach about prayer?

What did Jesus say about prayer?

The Lord’s Prayer is found in the middle of Christ’s Sermon on the Mount—the heart and core of what genuine Christianity is all about. Christ broached the subject of prayer in a portion of the sermon that explains Christians should not flaunt their good deeds for everybody to see. He said that good deeds—giving to charitable causes, serving others, etc.—should be done “in secret” (Matthew 6:4).

After making that important point, Christ transitioned to the topic of prayer. He gave a number of points that are very important for all Christians to understand—and that contradict many of the practices found in Christianity today.

Prayer is not for show

Jesus applied the same principle He made about good works to prayer: “And when you pray, you shall not be like the hypocrites. For they love to pray standing in the synagogues and on the corners of the streets, that they may be seen by men” (verse 5). In other words, we shouldn’t use prayer to show off our spirituality to others.

Instead of a public show, Jesus taught: “When you pray, go into your room, and when you have shut your door, pray to your Father who is in the secret place; and your Father who sees in secret will reward you openly” (verse 6).

(Note that there are times when praying in public is appropriate, such as at a family meal, church service, wedding or a funeral.)

Pray to the Father

Jesus was very clear that our prayers are directed to God the Father: “Pray to your Father who is in the secret place” (Matthew 6:6). Now that Jesus Christ is in heaven as the Mediator between God and man, we pray “in the name of our Lord Jesus Christ” (Ephesians 5:20; 1 Timothy 2:5). Jesus said we can ask the Father for anything in His name (John 14:13-14).

Though Christ was very clear, it is amazing how many churches pray in ways that directly contradict this instruction. Prayers are not to be directed to angels, Mary or any saints!

Pray from the heart

Jesus made another clear statement that is widely ignored: “And when you pray, do not use vain repetitions as the heathen do. For they think that they will be heard for their many words” (Matthew 6:7).

Christ was referring to the pagan form of recitation and chanting prayers based on the idea that repeating a prayer will bring favor from God (or the gods). This form of repeating or chanting prewritten prayers is practiced extensively in the Catholic and Orthodox churches.

God doesn’t want prewritten prayers to be repeated over and over. This does nothing to fulfill the basic purpose of prayer, which is to develop a close, personal relationship with God.

If you do a study of the many prayers recorded in the Bible, you will notice that they are distinct, personal and heartfelt communication between the individual and God. Here are a few prayers that are helpful to study:

To learn more about how to have real, meaningful prayers to God, read the article “Prayer From the Heart.”

Then Jesus got more specific. He said, “In this manner, therefore, pray” (Matthew 6:9).

He then gave an example prayer that, sadly, has been misused by many in mainstream Christianity—in direct contradiction of His instruction in verse 7 to not use repetitious prayers! This is commonly called the “Lord’s Prayer” and is recited repetitively in many denominations.

But Christ did not give this prayer for us to repeat over and over.

So what was Christ teaching us in the so-called “Lord’s Prayer”? Essentially, Jesus was providing an outline to show the general structure and topics that should be included in our regular prayers to God. This outline would more accurately be called a model prayer.

Study the accompanying graphic to better understand what Christ was teaching through this example prayer.

God wants a deep, personal relationship with you. To build that relationship, you need to communicate with Him through prayer. In order for those prayers to be “effective” and “fervent” (James 5:16), we must allow Jesus Christ to teach us how to pray and remove traditions that contradict what He taught!

To learn more about the Bible’s teachings on prayer, read “How to Talk to God.” 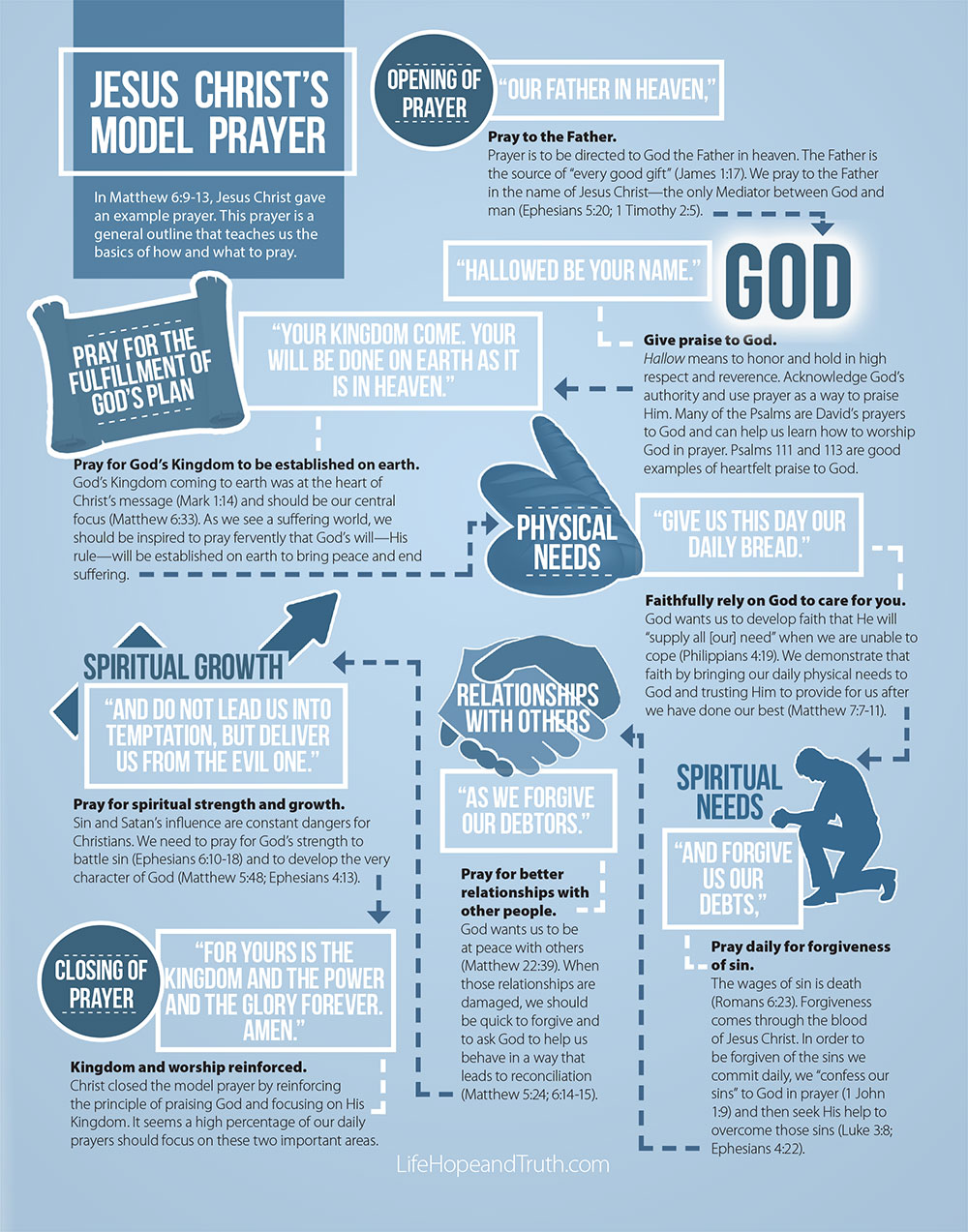