Discouragement is a problem for many. It can harm us both mentally and emotionally and prevent us from moving forward. How can you overcome discouragement?

Most, if not all, have experienced discouragement at some time in their lives. It seems to be an inevitable fact of life. Most would agree it isn’t a productive state of mind, yet all of us can fall prey to it. The root word—discourage—means to lose confidence and hope because of difficulty and failure. Discouragement can paralyze us, preventing us from wanting to move forward in life. And, to be honest, this world is very often anything but encouraging. Failure, in even small things, is an ever-present fear for many.

Overcoming discouragement is a daunting task, but we are not alone in facing up to it.

What can we learn from the Bible that will give us the tools to face and overcome discouragement?

The example of Jesus Christ is the standard to consider as we discuss this topic. He was a human being and “was in all points tempted as we are, yet without sin” (Hebrews 4:15). This included not succumbing to the temptation to allow discouragement to cause Him to give up and fail as Savior of all mankind.

Jesus would not let this happen.

A prophecy found in Isaiah 42 provides insight into how He dealt with and defeated the temptation to give in to discouragement: “He will not fail nor be discouraged, till He has established justice in the earth; and the coastlands shall wait for His law” (Isaiah 42:4).

The question for us is, Why would Jesus “not fail nor be discouraged”? What can we learn from Isaiah 42:4 that will provide insight into how we, too, can overcome discouragement?

Jesus focused on His plan and purpose

Jesus’ focus and purpose was far beyond this temporary world and extended far into the future. He was focused on the Kingdom of God, when He will establish justice and peace on this earth. He knew His role was to be both the Savior of all mankind and the future King of righteousness over the entire earth.

He was not going to allow anything in His life to so discourage Him that it would cause Him to fail in fulfilling that purpose.

This doesn’t mean it was easy. Nor does it mean He would not suffer as a human being.

It means He never allowed His focus to waver. He never lost sight of the plan that He and His Father had put in place before time began. He was absolutely determined that He would not fail in carrying out this plan.

Let’s consider some ways we can follow His example and overcome discouragement.

1. Recognize the temporary nature and limitations of physical life.

If our focus is solely upon this temporary life, we can become discouraged and disappointed. The key to avoid discouragement is looking at this life as a training ground—a brief period to build character and establish an intimate relationship with God. Jesus viewed His physical life as temporary—and so should we.

Wise Christians see physical life for what it is and look beyond to a greater, more permanent reality.That’s not to say that the decisions and experiences of this life aren’t important. We should set and accomplish goals in this life. We can experience physical success.

At the same time, however, we should recognize the fleeting and temporary nature of life and that it will disappoint us at times.

As the book of Ecclesiastes emphasizes, life has its limitations and disappointments. We can overcome discouragement by expecting those disappointments, not becoming consumed by them.

Wise Christians see physical life for what it is and look beyond to a greater, more permanent reality.

To learn more about your purpose, read “Why Were You Born?”

2. Shift your focus to the spiritual reality.

Jesus Christ’s focus was always upon the spiritual reality.

He came from that reality and was going to return to it at the conclusion of His time as a human being. Nothing in His temporary, physical existence was going to distract Him from that. He was determined not to allow discouragement to distract Him from the spiritual goals and purpose of His ministry. He knew eternity far exceeded any temporary trials and suffering that He would experience.

Where our mind is focused will determine how we will react and deal with difficulties and trials that cause discouragement. Having a clear understanding of our spiritual potential, as revealed in the Bible, is the key. This future is where our focus should be as we deal with the realities of life.

The tendency to give in to discouragement and lose heart becomes less of a concern when we learn to refocus our minds on the spiritual reality of eternity.

3. Be determined that failure is not an option.

Actor Ed Harris, portraying NASA flight director Gene Kranz in the 1995 film Apollo 13, made this now famous statement as Mission Control was attempting to get the Apollo 13 crew back alive:

When bad things happen in life, we should look at our options and determine that failure will never be one of them. “Failure is not an option.”

This line was actually inspired by a comment made by Jerry Bostick, Apollo 13 flight controller, in an interview years after the crisis: “When bad things happened, we just calmly laid out all the options, and failure was not one of them. We never panicked, and we never gave up on finding a solution.”

This statement is an excellent guide for dealing with and overcoming discouragement. Bad things happen in life, but rather than becoming discouraged and quitting, we should look at our options and determine that failure will never be one of them.

Keeping our focus clear and on the future God intends for us will help us do this.

We must remain steadfast and move forward until the end of our natural lives. This was the approach of the apostle Paul in Philippians 3:14: “I press toward the goal for the prize of the upward call of God in Jesus Christ.”

Remaining focused on our purpose and future will give us the tools to effectively deal with the natural tendency to become discouraged.

Doing so will allow us to choose, as Jesus Christ did, to “not fail nor be discouraged.”

Note: If you are dealing with depression, which goes beyond discouragement, please consider reading “Overcoming Depression” and “What Christians Need to Understand About Mental Health.” 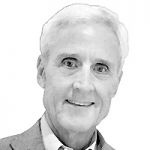 Bill Welch resides in Houston, Texas, with his wife, Kathy. They have two married daughters and have been blessed with four wonderful grandchildren. He has been a member of the Church of God since 1971. He attends the Houston South congregation of the Church of God, a Worldwide Association, where he serves as a deacon.