Let no one seek his own, but each one the other’s well-being. 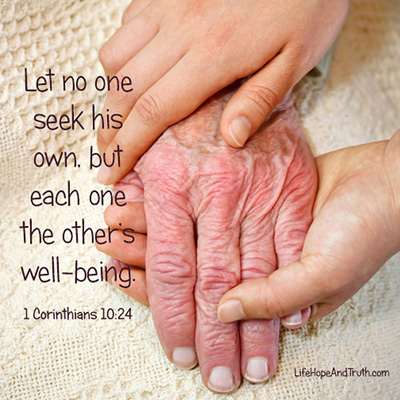 The matter of whether to eat clean meats that had been sacrificed to idols was a serious issue for Christians in the first century. While Paul clearly taught that one was not to “partake of the Lord’s table and of the table of demons” (1 Corinthians 10:21), meaning to participate in a festival dedicated to a pagan god, he also taught that members shopping in the meat markets didn’t have to ask whether a clean animal offered for sale had first been sacrificed to a pagan god (verse 25).

Realizing that the eating of meat sacrificed to idols could trouble the consciences of some believers—especially those who had just come out of paganism—Paul warned them against doing something that would offend their brothers.

The principle Paul was emphasizing is that brethren need to do what would be “helpful” for their fellow Christians (verse 23).

A foundational teaching of Christianity is to seek others’ well-being. The mind of Christ is to overcome “selfish ambition” and instead “in lowliness of mind let each esteem others better than himself. Let each of you look out not only for his own interests, but also for the interests of others” (Philippians 2:3-5).

For more on how God wants us to show love, see “The 10 Commandments for Today.”