Then the multitudes who went before and those who followed cried out, saying: “Hosanna to the Son of David! ‘Blessed is He who comes in the name of the LORD!’ Hosanna in the highest!” 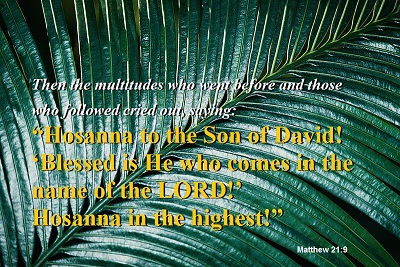 As Jesus Christ and His disciples drew near Jerusalem not long before His crucifixion, He sent two disciples to borrow a donkey and her colt. He told them exactly where to find them, and prophesied that the owner would be happy to loan them (Matthew 21:1-7). This fulfilled the prophecy of Zechariah 9:9.

A great multitude of followers “spread their clothes on the road; others cut down branches from the trees and spread them on the road” that He was taking into Jerusalem (verse 8).

Jesus Christ is the promised Messiah and King. Read more about this in the article “King of Kings and Lord of Lords.”