Will the United States continue to lead the world in influence and prosperity? Or is it destined to lose its power—or collapse? What will happen to America?

Doomsday is bearing down on America in the minds of many, as each new crisis comes and other dangers seem lined up on the horizon.

Others see the future of America as providing more fantastic opportunities in every way. New inventions allow a level of communications and efficiency that most never dreamed of.

While technological advances continue to impress us, there is also the ever-growing “dark” side of man’s nature being revealed in his misrule on the planet. Poverty, war and ethnic tensions continue to worsen.

The state of the United States

Even the United States of America—the nation long recognized as the most powerful and influential nation of the free world—is experiencing these difficulties.

A Rasmussen poll taken the week of March 26, 2020, reported that only 40 percent of likely U.S. voters say the country “is headed in the right direction.”

An August 2019 NBC News/Wall Street Journal poll found that 70 percent of Americans say they feel angry “because our political system seems to only be working for the insiders with money and power, like those on Wall Street or in Washington.”

Just 27 percent of those surveyed say they’re confident that their children’s generation will be better off than them, and 60 percent say that race relations in the United States are bad.

According to the Bible, what is going to happen to America?

The majority of the people who settled in the United States of America have a unique connection to the biblical patriarch Abraham and his descendants. Genesis 48:13-16 explains how Joseph, Abraham’s great-grandson, was sold into slavery by his brothers yet became a powerful ruler in Egypt.

Joseph’s two sons, Ephraim and Manasseh, received from their grandfather Jacob a special blessing that had previously been passed down from Abraham. Prophecies in the Bible reveal that these two brothers—Ephraim and Manasseh—would rise to prominence. Today the descendants of Ephraim and Manasseh are largely the peoples of Britain (and related nations) and the United States respectively.

To understand what is going to happen to America, we have to study the biblical prophecies directed toward Manasseh.

The Bible prophesied that the descendants of Manasseh would become a “great” nation and that the descendants of his brother, Ephraim, would “become a multitude of nations” (Genesis 48:19). The United States and Britain (and some of its former colonies, such as Canada, Australia and New Zealand) are the nation and group of nations that best fit this biblical description.

Archaeological, linguistic and historical information confirm the modern identities of these nations. For further study, see our articles: “12 Tribes of Israel Today: Who Are They?” “Who Are the United States and Britain in Prophecy?” and “Blessings of Abraham: How They Came to the United States.”

Prophecy fulfilled by the United States

As far as military prowess and physical blessings go, the Bible says that in “the last days” the descendants of Joseph would be exceptionally blessed above other nations and even their own brethren—the other nations that would arise from Abraham’s descendants (Genesis 49:1, 22-26). These prophecies have come to pass just as God said.

Summarizing the physical resources that make the United States such an exceptional nation, Stratfor states, “The American geography is an impressive one. The Greater Mississippi Basin together with the Intracoastal Waterway has more kilometers of navigable internal waterways than the rest of the world combined. The American Midwest is both overlaid by this waterway, and is the world’s largest contiguous piece of farmland.

The United States is indeed a very powerful nation with abundant fertile land, a good climate and laws that allow for creativity, investment, hard work and the ability to enjoy the fruits of one’s labor.

In spite of the United States’ vast blessings, poor decisions by its leadership over the years threaten the way of life so many Americans have come to enjoy. Irresponsible increases in debt and entitlement programs that cannot be sustained at current levels of taxation are problems passed from one administration to the next. In April 2020, U.S. Debt Clock.org estimated that each U.S. citizen’s share of the debt was $71,903!

Debt is not America’s only problem. “A recent study from Pew Research shows that in most regions of the world, the U.S. image now faces a new challenge: doubts about America’s superpower status” (“Pew: U.S. Becoming a Second-Rate Power”).

The article goes on to explain that most people in 15 of 22 nations polled believe that China “will replace or already has replaced the United States as the world’s leading superpower.”

Sexual immorality is another problem. Deviant sexual behavior has become a way of life for many in the United States. God’s laws against living together prior to marriage, marital infidelity and same-sex marriage are now considered archaic and out of date by an increasing number of Americans.

Abortion—taking the life of an innocent child prior to birth—has become the common method of birth control for millions of women. Some callously argue that this is their right.

Claiming freedom and superior intellectual understanding, many in the United States think they know better than their Creator. Reflecting this way of thinking, the United States is one of the largest producers of pornography in the world.

The ancient Israelites had similar attitudes toward God’s moral laws.

As God said through the prophet Jeremiah, “How shall I pardon you for this? Your children have forsaken Me and sworn by those that are not gods. When I had fed them to the full, then they committed adultery and assembled themselves by troops in the harlots’ houses. They were like well-fed lusty stallions; every one neighed after his neighbor’s wife” (Jeremiah 5:7-8).

God also lamented that they did not “know how to blush” (Jeremiah 6:15) and “therefore they shall fall among those who fall; in the time of their punishment they shall be cast down” (Jeremiah 8:12).

History repeats: the coming collapse of the United States?

The Bible teaches that individuals and nations need to learn to obey God and depend on Him for blessing, safety and understanding.

Sadly, humans rarely remember the lessons of history and often repeat the same mistakes generation after generation. Biblical prophecies about Israel and the modern descendants of Israel exist for our benefit if we will only study them and act accordingly.

We need to pay attention to what God says, or we will suffer the consequences of poor decisions.

The time of Jacob’s trouble

Because the modern descendants of Abraham continue to follow their ancestors’ pattern of denying God, the Bible predicts a time of severe punishment that will come upon these peoples. Called “the time of Jacob’s trouble” in Jeremiah 30:7, this dire time will occur prior to Christ’s return.

Even though the people of the United States are prophesied to suffer greatly for their sins during this time of trial, the good news is that “he [Jacob] shall be saved out of it.” For more on this subject, see our articles: “Jacob’s Trouble: What Is It?” and “Why Is God Angry With America?”

What you need to do

What will happen to America, and what is going to happen to you? While punishment is going to come to the United States and all nations for disobedience to God’s laws, you don’t have to suffer this fate. When Jesus came preaching the gospel of the Kingdom of God, He said, “The time is fulfilled, and the kingdom of God is at hand. Repent, and believe in the gospel” (Mark 1:15).

If you truly believe this message of salvation, your life can change for the better and you can have the peace of mind knowing the wonderful blessings God has in store for you. Learn more about how God wants you to respond in the section on “Repentance.” 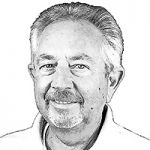