Many churches teach that the fate of evil people is an eternity of torment in hell. But Jesus contradicted that belief in 29 words. What is hell in the Bible?

With all the variations in belief found among mainstream Christian churches, one belief that many agree upon is that those who are evil and reject God will be sent to hell where they will be tormented forever.

This teaching is based on two basic assumptions:

These beliefs have been used over the centuries to motivate people to action through fear. In fact, the fear of hell has been a driving force behind the development of mainstream Christianity.

For instance, the Catholic Church drew much of its authority over people’s lives by claiming that it controlled the gates of heaven and hell. Throughout the Middle Ages, many people submitted to the church and paid indulgences because they believed that obeying the Roman Church would help them escape hell.

After the Protestant Reformation, belief in hell was maintained by the various Protestant churches and used similarly—to frighten people into accepting Jesus Christ.

One classic example, the infamous Jonathan Edwards sermon “Sinners in the Hands of an Angry God,” describes a God who holds “you over the pit of hell, much as one holds a spider, or some loathsome insect over the fire, abhors you, and is dreadfully provoked: his wrath towards you burns like fire; he looks upon you as worthy of nothing else, but to be cast into the fire.”

Though most Christian churches do not use such graphic imagery today, the theology of hell is still the majority opinion even if the rhetoric has been toned down.

Many now describe hell in softer terms, such as “separation from God’s love” or “darkness and isolation,” instead of the traditional description of fiery torture that we find in Dante Alighieri’s The Divine Comedy or Jonathan Edwards’ sermon.

Those ideas of hell disproved in one verse

But now let’s take a look at just one statement of Jesus Christ that is central to the topic of hell in the Bible. When understood properly, this one statement completely demolishes the entire doctrine of eternal torment in hellfire and stands in stark contrast to what is commonly taught in His name!

“And do not fear those who kill the body but cannot kill the soul. But rather fear Him who is able to destroy both soul and body in hell.”

Before we analyze Jesus’ words, we should consider the context. Jesus had just commissioned His disciples to go out and spread His message. He warned them that they would face persecution—and possibly martyrdom.

But He encouraged them to face that possibility with courage, not fear. They were not to be paralyzed by the fear of being killed for preaching the gospel, because they were to understand the basic truth He spoke in Matthew 10:28.

The message of this statement is very simple: Don’t fear people or the temporary harm they can do to you. Instead, fear God (reverence Him, stand in awe of Him) because He has the power to destroy or save you for all eternity.

Incredibly, there are some who point to this verse as a proof of the doctrine of hell (eternal torment in hellfire) and the immortal soul. But it actually teaches exactly the opposite!

“And do not fear”

Jesus begins by stating that His followers should not fear “those who kill the body but cannot kill the soul.”

Some point to these words to “prove” that humans possess an immortal soul that is separate from the body. But this idea is based on a concept called dualism that has its roots in Greek philosophy.

Greek philosophers, such as Plato, separated humanity into two components: the body (the physical) and the soul (an immaterial part of a human being that they believed could not die).

The Bible presents a completely different picture. The two words used for soul in the Old and New Testament are nephesh and psuche. Neither of these words means soul in the classical Greek and mainstream Christian sense of the word. They both simply mean living being.

Nephesh is the Hebrew word used to describe the life that God breathed into the first human being. Adam became a “living soul” (King James Version) or a “living being” (New King James Version) when “the breath of life” was given from God (Genesis 2:7). The Old Testament teaches very clearly that the human soul can and does die (Ezekiel 18:4).

Psuche is essentially the Greek equivalent of nephesh. It means “life,” “living soul” or the “vital force which animates the body and shows itself in breathing” (Thayer’s Greek Lexicon). The New Testament usage of the word also shows that it is not immortal (Matthew 10:39; John 10:11; 15:13; Revelation 8:9).

Jesus’ point was that human beings can kill the physical body, but they can’t take away the life potential—God’s ability to resurrect each person’s unique identity, personality and memory. Only God has control of this.

The second half of the verse explains the first half. Jesus’ follow-up sentence actually turns almost 2,000 years of Christian thought completely on its head! It disproves the doctrines of the immortal soul and eternal torment in hellfire. It exposes them for what they are: philosophical constructs of man.

Instead of fearing human beings, Jesus says we should “rather fear Him who is able to destroy both soul and body in hell.”

If you have always believed the traditional Christian doctrines of hell and the immortal soul, read this verse again. Hell in the Bible is much different than what most of Christianity teaches about hell.

1. The soul is mortal

Mainstream Christianity claims that the soul is immortal and lives on for eternity after death.

But this belief does not square with what Christ is teaching in this verse. He clearly said that both soul and body can be destroyed. The Greek word translated destroy means exactly what it says—to “destroy utterly, … to perish” (Vine’s Expository Dictionary of New Testament Words).

Christ uses the word Gehenna here to describe the ultimate punishment of the wicked. Gehenna (translated hell in English) was actually a location south of Jerusalem that was used as a trash dump. There was a constant fire burning there that would consume garbage and the bodies of criminals.

Gehenna was not a site of torture. It was a symbol of death and complete annihilation.

Christ’s statement here is simple and direct—those who are cast into Gehenna (called “the lake of fire” in Revelation 20:14-15) will be thoroughly destroyed. Both their soul and body will be entirely burned up.

Jesus’ teaching about what hell is harmonizes flawlessly with what is written in both the Old and New Testaments about the fate of the wicked.

Around 450 years earlier, God inspired the prophet Malachi to write that the wicked would be thoroughly burned up and become “ashes” (Malachi 4:1-3). After Christ’s death and resurrection, Paul was inspired to write one of the most direct statements in the entire Bible about the fate of the wicked: “The wages [consequences] of sin is death” (Romans 6:23).

Many other scriptures make the same point.

So, let’s step back and see what we really need to learn from Christ’s statement in Matthew 10:28. We are told that we should fear God. That means we should have an awe and respect for God’s incredible power and deeply realize the consequence of refusing to obey Him.

That consequence is not what the majority believe. The truth is, God will not throw people into eternal hellfire to be tortured for all eternity. He will mercifully destroy those who refuse to obey Him by entirely burning them up—ending their conscious existence for all eternity.

This truth represents the perfect character of a merciful and just God.

We should use Jesus’ words as they were intended, as a prod to motivate repentance, obedience and faithfulness to God, because He is “able to destroy both soul and body in hell.”

Find more resources in our life after death section. 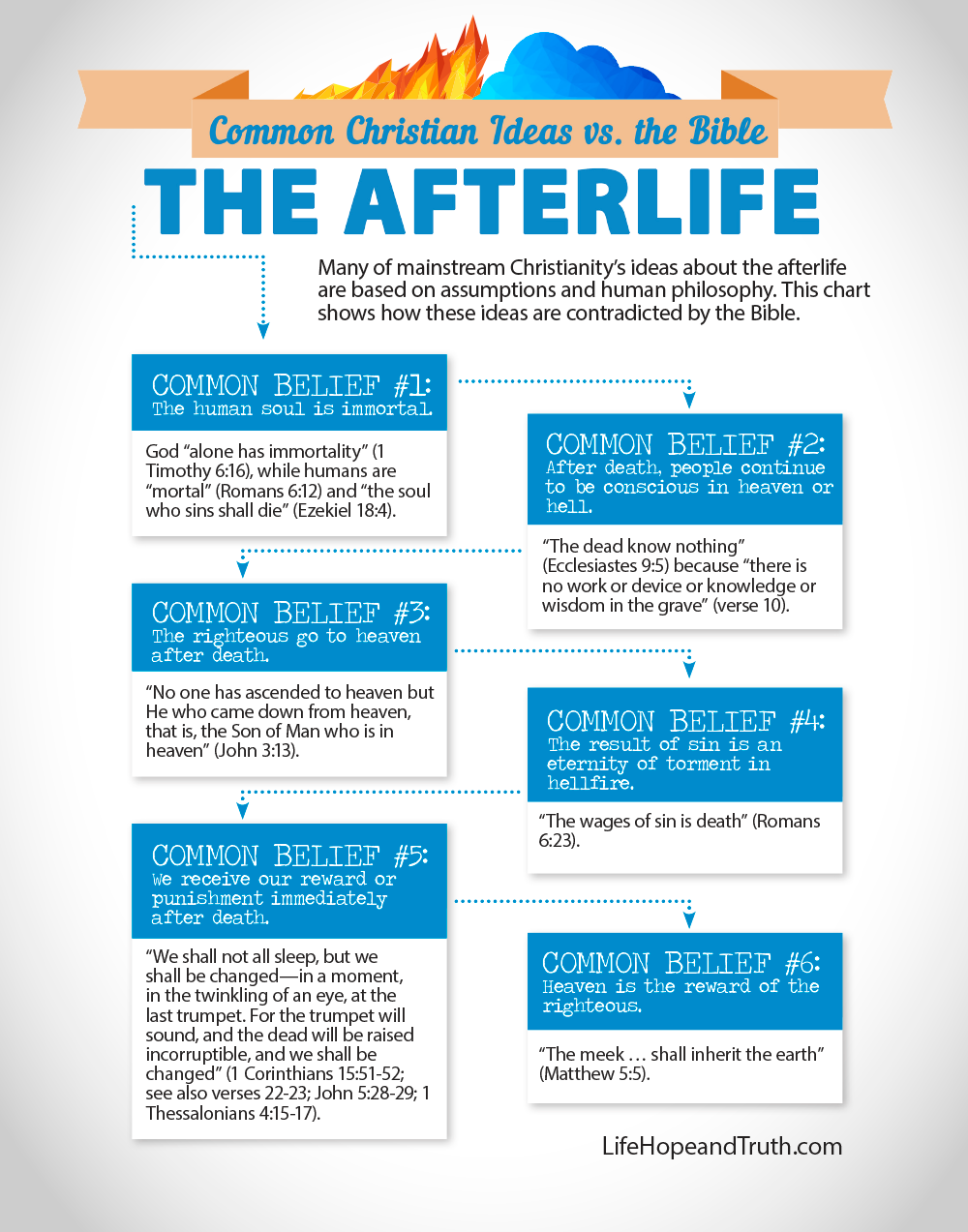