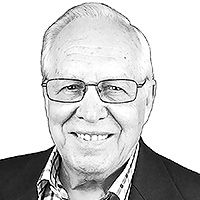 After completing his degree in theology, he married his wife, Mary. They were married for more than 57 years, with two children and two grandchildren.

They moved to Canada to serve the churches there across the entire dominion of Canada where they served in various pastoral and administrative roles. They came back to the United States in 1984 and finished their last 30 years serving there.