Four marriage problems are so lethal a well-known counselor labeled them the “Four Horsemen of the Apocalypse”: criticism, contempt, defense and stonewalling. The Bible gives advice about how to overcome them with God’s help. The biblical solutions include the golden rule, honor, humility and forbearance.

Those who understand the prophecies of the first four seals in Revelation 6 recognize the actual four horsemen of the Apocalypse as symbols of false religion, war, famine and pestilence. But this marriage counselor just uses the term to mean four terrible problems.

His principles for solving marriage problems are very helpful, but they are not new. Long ago God inspired principles to be recorded in the Bible to help with relationship problems—like marriage problems—with an even better promise for success. (Also see our article “How to Save Your Marriage.”)

However, before we examine God’s keys to a happy marriage, let’s define those four evil marriage problems that are present in many marriages today, perhaps even yours.

Criticism can involve censure, disparagement, condemnation and denigration. The fact that there may be complaints by mates to one another is understandable. Most of the time those complaints can be fixed by apologizing for one’s mistake and immediately fixing the problem if possible. A constant attitude of criticism, however, is truly a horse of a different color that requires fixing one’s character.

Contempt is the total absence of admiration. Often included with contempt are disgust, scorn, disdain and mocking. These are not the responses that come from a loving marriage relationship. Often we may find that contempt leads to questioning another’s values and motives—another marriage problem we must remove from our home.

Sometimes we turn the table on our mate. Rather than addressing the issue, we may respond to a complaint—even a legitimate complaint—by verbally attacking our mates. Sometimes our counterattacks are stronger and more destructive than the original criticism!

It should be easy to see that a successful marriage cannot exist unless the marriage problem of defensiveness is overcome.

Stonewalling may seem easy to understand, but it involves more than simply being a stone wall that won’t respond or listen. One writer defined stonewalling this way: “The most common use of the word means to intentionally delay using specific tactics. Those gifted at the art of stonewalling avoid answering questions, halt a conversation and even cause the other person to forget the subject altogether. How does one stonewall? Some individuals will repeat inconsequential information. … In other cases, stonewallers simply refuse to budge from their stance, repeating phrases over and over. Politicians are often masters of this tactic.”

The bottom line is that a stonewaller cannot be engaged in a respectful conversation. A successful marriage requires both mates working together, and this marriage problem prevents this from ever happening!

Before we seek solutions

Unrealistic expectations have been a theme in many novels and Hollywood movies. Perhaps the hero sees a woman he considers to be the most perfect in the world. The highest mountain peaks, the hottest deserts and the deepest oceans could not keep her from him. But he is disillusioned when she turns out not to be perfect after all. And glaringly obvious is the fact the hero himself is far from perfect, a point none of us should miss.

We are all imperfect. No matter whom we marry, there will always be problems. That’s not to say problems cannot be worked on and resolved, but it’s a fact that every marriage will have some difficulties, and they may take years to change.

A wise maxim says, “We divorce one problem only to marry another.” According to Jennifer Baker of the Forest Institute of Professional Psychology in Springfield, Missouri, 50 percent of first marriages, 67 percent of second marriages and 74 percent of third marriages end in divorce. So statistically, our first marriage has the best chance for success!

But even if you are beyond the first, the time to make changes is now—there is still hope. A successful marriage must include the understanding that even after years of marriage, neither mate will achieve perfection. How we address those stubborn problems will dictate the outcome. And God has inspired solutions to remove those deadly marriage problems, showing how to solve the solvable and how to deal with what may be insolvable.

After God created the first man, Adam, He created a helper “comparable” to the man (Genesis 2:18). Adam recognized his wife Eve as bone of his bones and flesh of his flesh (Genesis 2:23). Men and women are different but interdependent. Different personalities and experiences can work together to mutually support and benefit the marriage and family.

Attempting to change your mate to become like you generally won’t work, and it can be the beginning of damage to the relationship. One cannot belittle and constantly condemn (use criticism) or scorn and mock (show contempt) and expect to have a successful marriage.

Rather, as the apostle Paul wrote, “Husbands ought to love their own wives as their own bodies; he who loves his wife loves himself. … Let the wife see that she respects her husband” (Ephesians 5:28, 33).

Would I be hurt if someone used the same tone, body language and words as I’m using toward my mate? Would I feel respected if I received complaints the way I’m giving them?The God-given institution of marriage is dependent on following the golden rule. Success, happiness and peace depend on treating your mate the way you would want to be treated. Verse 29 of the same chapter explains that no one has ever hated his own flesh. We might kid ourselves, but in reality we generally do treat ourselves better than anyone else.

Would I be hurt if someone used the same tone, body language and words as I’m using toward my mate? Would I feel respected if I received complaints the way I’m giving them? Would I feel helped and loved or disdained and belittled if my words boomeranged back to me?

Defense and stonewalling were the other two damaging marriage problems.

There are surely times when it is appropriate to defend our actions, and no one wants to be treated like a carpet, trampled by any and every complaint. But we must also give the benefit of the doubt. Many if not most actions in marriage began with good motives, even if they were improperly administered. Just as small children learn to walk (a good intent) they still fall, sometimes even on someone else. As marriage partners, we must learn to believe the best, putting our trust in each other if we truly love one another (1 Corinthians 13:7).

When we do make mistakes, love requires us to be humble enough to admit it. We would hope a loving mate would point out our mistakes in a loving way rather than a provocative, condemning, critical manner; but that doesn’t always happen. Either way, wrong is still wrong, and we should not go into an adversarial defensive mode.

Believe it or not, you will gain more respect in marriage by humbly admitting guilt than by attempting to defend a wrong. The Bible calls it being “exalted” (Matthew 23:12). The admission must then be followed by action. Show your mate there is a real attempt to overcome.

There are seemingly unsolvable problems that everyone faces, but generally they can be solved. It’s just that they may take years to overcome. Whether inherited or learned through life experiences, they are present in most of us. Some will be so destructive they will cause separation and divorce. Others should be borne on wide shoulders. The difference between solving one type of problem and bearing with another is a choice that can only be decided by a godly, wise mate. Remember, you always want to look back and know every attempt was made to save your marriage.

Bearing another’s burdens (Galatians 6:2) requires patience. And patience is one of those loving, godly attributes we all need more of. If we each concentrate on overcoming our own problems, realizing self-control is a godly attribute while mate-control is not, we are making good progress!

Regardless of the situation, are you open to considering the opinions or concerns of your mate? If we really respect, honor and believe that the intelligent, wonderful, handsome/beautiful person we married is that same person, we should take his or her concerns seriously.

Notice God’s admonition in the book of James: “But the wisdom that is from above is first pure, then peaceable, gentle, willing to yield, full of mercy and good fruits, without partiality and without hypocrisy. Now the fruit of righteousness is sown in peace by those who make peace” (James 3:17-18).

Clearly, stonewalling is not “willing to yield”; and it will not result in a joyful, peaceful, kind, good, gentle, selfless marriage. So let’s learn to bear with, reason with and yield to one another, sharing each other’s ideas, in order to become the unified couple God wants us to be.

What I wish to do

Success in marriage is not easy. The apostle Paul described the human condition this way: “For what I am doing, I do not understand. For what I will to do, that I do not practice; but what I hate, that I do” (Romans 7:15). And then he asked how he could be delivered from such a state of mind (verse 24). The answer is “through Jesus Christ our Lord!” (verse 25).

No matter how hard we try to destroy criticism, contempt, defense and stonewalling, without supernatural intervention from God, it’s impossible for us to fully achieve. That’s why it is so important for every married person to seek God’s help and guidance daily for a strong marriage.

Even if only one mate seeks God through prayer, supplicating God for strength to act the right way, the marriage can still improve. And who knows? Once you begin, you just might create a domino effect. Doing what is right is infectious. Infect your mate to follow suit and destroy those four marriage problems before they destroy your marriage!

Read more about how to have a successful marriage in the other articles in this “Marriage”section. 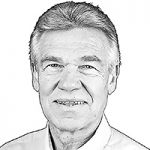