On the fourteenth day of the first month at twilight is the LORD’s Passover. —Leviticus 23:5

For I received from the Lord that which I also delivered to you: that the Lord Jesus on the same night in which He was betrayed took bread; and when He had given thanks, He broke it and said, “Take, eat; this is My body which is broken for you; do this in remembrance of Me.” In the same manner He also took the cup after supper, saying, “This cup is the new covenant in My blood. This do, as often as you drink it, in remembrance of Me.” For as often as you eat this bread and drink this cup, you proclaim the Lord’s death till He comes. —1 Corinthians 11:23-26

To teach that the Festival of Passover is a memorial of God’s deliverance of His people from the bondage of sin through the sacrifice of Jesus Christ.

We encourage you to read through this material with your children to provide an overview of the meaning of the Feast of Passover and what it pictures. Then choose appropriate materials from the supplemental pages that you feel will be helpful in teaching and reinforcing the meaning of the day.

THE SIGNIFICANCE OF THE FESTIVAL

Passover, the first of seven annual festivals occurring during three separate seasons within the year, initiates God’s unfolding and fulfilling of His purpose, plan and promises for humanity. This first, vital step in God’s master plan commemorates the sacrifice of the Passover Lamb, Jesus Christ.

After nine miraculous plagues had served to harden Pharaoh’s heart, the devastating final plague passed through Egypt at midnight.

In Exodus 12, God provided detailed instructions to ancient Israel about this festival’s observance at the beginning of the fourteenth day of the first month at twilight. After nine miraculous plagues had served to harden Pharaoh’s heart (Exodus 4:21),  the devastating final plague passed through Egypt at midnight, causing the death of Egypt’s firstborn. Foreshadowing the prophesied death of Jesus Christ, the children of Israel killed the Passover lamb and sheltered under its shed blood. In fulfillment of His promised mercy, God passed over the homes that had the visible sign of the Passover sacrifice—the lamb’s blood—brushed on the lintel and doorposts.

Although observed for generations as a memorial of the saving of Israel’s firstborn, Passover also foreshadowed the time when the true, perfect Lamb of God would be sacrificed, revealing the much greater and deeper meaning of the symbolism of the sacrificed, unblemished, male lamb and the significance of this festival (1 Corinthians 5:7).  It was through the actions recorded in Exodus 12 that the ancient Israelites symbolically rehearsed the depiction of the prophesied sacrifice of the Lamb of God who would pay the penalty for our sins (1 Peter 1:18-19).

Desiring to bring“many sons to glory” within His family, the Father sent the Word to proclaim the gospel and to redeem humanity from certain eternal death.

Since “all have sinned and fall short” (Romans 3:23),  we have all rightly earned the sentence of eternal death (6:23).  Without the pardoning of our sins, we are completely cut off from the Father and the gift of eternal life. Desiring to bring “many sons to glory” within His family (Hebrews 2:10),  the Father sent the Word to proclaim the gospel and to redeem humanity from certain eternal death (John 3:16; Romans 5:8-11).

Jesus Christ—God manifested in the flesh—willingly emptied Himself of all life, spiritual and physical, that we might claim Him as our Passover sacrifice and allow His death to pay the penalty for our sins. The very One who created physical man became the perfect and complete atoning sacrifice for all humanity.

Taking upon Himself the sins of the world, Jesus Christ provided the way for humanity to become a perfect, spiritual creation. We are reconciled to God by the death of Jesus Christ and have access to eternal life through His resurrection. Christ is the “author and finisher” of our salvation (Hebrews 12:2).

These new symbols were given to help us solemnly remember the true Passover Lamb.

The evening prior to His crucifixion while Jesus Christ was keeping the Passover with His disciples, He introduced new symbols and provided specific instructions for the New Testament Passover observance. These new symbols were given to help us solemnly remember the true Passover Lamb. It is through the annual observance of and participation in this highly significant ceremony that we are reminded of both the suffering and death of our Savior.

The Feast of Passover demonstrates our urgent need to have our sins forgiven so we can live a life of righteousness.

Passover is a memorial. Just as Israel was sheltered under the protection of the Passover sacrifice’s blood, we are protected under the blood of Christ. As faithful followers of our Savior, Jesus Christ, we observe the Passover in remembrance of Him. The Feast of Passover demonstrates our urgent need to have our sins forgiven so we can live a life of righteousness.

You can use the following guided discussion topics to stimulate dialogue about the Festival of Passover. When reading and discussing the events surrounding Christ’s crucifixion, be mindful of the maturity level of your children. Young children will not necessarily need all of this information during their early years.

Passover to be observed in the first month (Deuteronomy 16:1)

Throughout these four days, the lamb would have been spoken about often and not neglected.

Passover lamb chosen on the tenth day of the first month (verses 3, 21)

Requirements of the lamb (verse 5)

Fourteenth day in the evening (verses 6, 21)

Explain that the Israelites were to place the lamb’s blood from the Passover sacrifice around the door of the house.

The Passover sacrifice was to be eaten with unleavened bread because it foreshadowed Jesus Christ, our Passover.

Roasted in fire and burned with fire (verses 9-10)

The Israelites were not permitted to leave their homes during the night of the 14th. They remained in their homes until morning.

Eaten while prepared to leave (verse 11)

Discuss the enormous impact this final plague had on the Egyptians: “ There was not a house where there was not one dead.”

Explain the first nine plagues were a direct strike against the pagan gods of the Egyptians.

A memorial throughout your generations (verses 14, 24-27)

Explain that Jesus’ parents traveled to Jerusalem every year to observe the Passover and the Feast of Unleavened Bread.

Did Jesus Christ keep the Passover?

Explain the humility Jesus demonstrated through washing the feet of the disciples.

Symbols of the New Covenant Passover

Christ provides us an example of foot washing (John 13:2-17)

Singing a hymn was an opportunity to give praise to God the Father.

The bread and the wine signify Christ’s entire sacrifice for all humanity.

The Father made provisions for humanity’s redemption prior to Creation.

Passover is observed with new and deeper meaning because of Christ’s suffering and death.

Stories related to the Festival of Passover

King Hezekiah restoring God’s festivals in 2 Chronicles 29-30: Due to the severe destruction and desecration of the temple, the priests and Levities could not cleanse it in time to keep the Passover in the first month. Hezekiah issued a decree that Passover would be celebrated on the fourteenth day of the second month (as instructed in Numbers 9:9-12 ).

King Josiah’s restoration of the observance of the annual holy days in 2 Kings 22; 23:1-3, 21-23 and
2 Chronicles 34-35:
In the 18th year of Josiah’s reign, a copy of the Book of the Law was found during the restoration of the temple. Hearing the warnings of God read aloud, Josiah repented and led Judah in a return to God. So fervent was Josiah’s restoration that “none of the kings of Israel had kept such a Passover as Josiah kept, with the priests and the Levites, all Judah and Israel who were present, and the inhabitants of Jerusalem” (2 Chronicles 35:18).

Rebuilding of the temple by decree of Cyrus, king of Persia, in Ezra 6: Cyrus released the exiled Jews
to their homeland and supplied the necessary resources for the rebuilding of the temple. Under the direction of Haggai and Zechariah, the temple was completed after four years, and the Passover and the Feast of Unleavened Bread were observed with great joy.

He who did not spare His own Son, but delivered Him up for us all, how shall He not with Him also freely give us all things? —Romans 8:32

Review God’s step-by-step plan of salvation for all of humanity by being reminded of the meanings and fulfillment of each of the annual festivals outlined in Leviticus 23. See how all seven festivals fit together to provide a complete Read More >

An attitude of choice and deep appreciation, gratitude should be a fundamental trait of a Christian. Help your children cultivate this beautiful quality, even through hardships, ultimately looking to God as the giver of all good gifts. Counteract selfishness with Read More >

Kindness is a topic that goes much deeper than just being outwardly polite. It springs from a deep desire to love our neighbor and extend godly compassion to others. Help your children learn and develop sincere thoughtfulness in action through Read More >

Is the parable of the Good Samaritan just a nice story about helping someone in need? What does being neighborly and loving our neighbor actually entail? Find answers to these questions and more to ponder in our lesson. Read More > 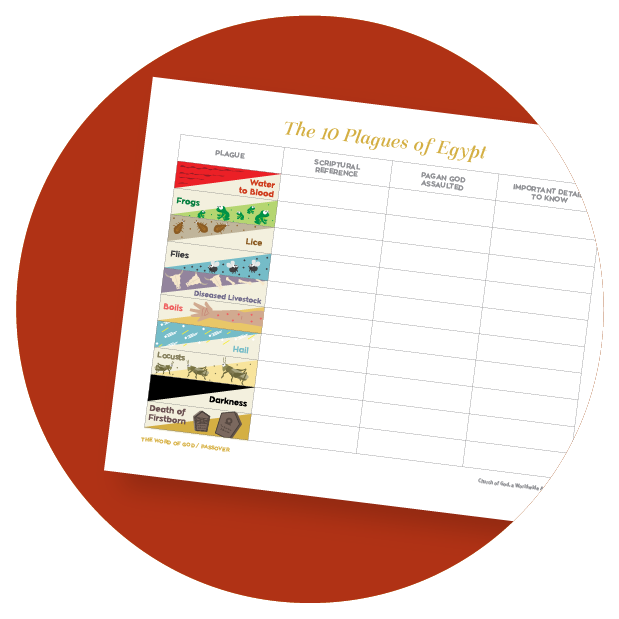 The 10 Plagues of Egypt

Enjoy this illustrated chart and fill in details about the devastating plagues that struck Egypt before the Israelites’ deliverance from slavery. Makes a great Passover or Feast of Unleavened Bread activity for your children. Read More > 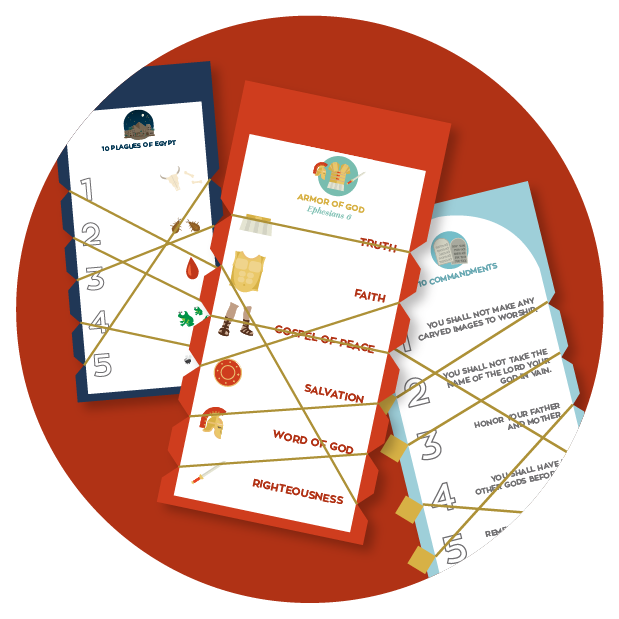 Create this engaging activity using yarn and some basic office supplies, and test your memory skills of Bible knowledge. You and your children will enjoy matching the 10 Commandments, the armor of God, and the 10 plagues of Egypt.  Read More >