The Israelites, Manna, and an Important Lesson

Remember the Sabbath day, to keep it holy.—Exodus 20:8

Oh, that they had such a heart in them that they would fear Me and always keep all My commandments, that it might be well with them and with their children forever! —Deuteronomy 5:29

Several hundred years after God created Adam and Eve and introduced them to the Sabbath, He began to teach His people, the children of Israel, about the Sabbath as well. To start with, He had to get their attention. So His plan was simple: first they must learn to listen to His instructions, and then they must be willing to follow His directions exactly. God is a master at getting His point across, as we shall soon see.

As our story unfolds, the Israelites have miraculously escaped from their cruel taskmasters and are now on the other side of the Red Sea. But instead of celebrating and giving God thanks, they are just plain SCARED! Why has Moses brought them into this strange land? Just look at it—it’s nothing but a wilderness! What are they going to eat? At least in Egypt they felt they had plenty of bread and pots full of meat.

So they did what scared people often do. They complained and blamed instead of trusting the One who had delivered them such a short time ago. They accused Moses saying, “You have brought us out into this wilderness to kill this whole assembly with hunger” (Exodus 16:3).

Moses scolded them for grumbling and doubting that God could take care of them.

God heard it all and sent Moses to them with a message: “Behold, I will rain bread from heaven for you” and “at twilight you shall eat meat” (verses 4 and 12). After Moses and his brother Aaron told the Israelites all that He had said, Moses scolded them for grumbling and doubting that God could take care of them.

Pause for thought: Moses was soon to discover Israel would find other things to complain about, and Israel would find out exactly how God felt about all their bellyaching. Turn to Numbers 11 and read another lesson Israel had to learn. What is the opposite of murmuring or complaining? What should the Israelites have done to please God?

A gigantic flock of quail flew in, darkening the sky and landing noisily amidst their camp.

That evening, true to God’s word (because He can’t lie), their meat arrived in an unexpected way: on the wing. A gigantic flock of quail flew in, darkening the sky and landing noisily amidst their camp.

Factoid: One of the characteristic quail calls sounds like “Chi-ca-go! Chi-ca-go!” Imagine hearing that all throughout the camp! You can check it out later on YouTube if you like.

There was enough for everyone (did you know there were thousands of Israelites in this camp—maybe even a million or more?), and soon the savory smell of quail cooking filled the air. The children of Israel loved this God-sent food, and they went to bed happy, full and satisfied.

When they got up the next morning everything was wet with dew, which wasn’t too unusual—or was it? As this dew evaporated it left little round seed-like things that looked like particles of frost all over the ground. They weren’t wet like frost, or cold. They weren’t grainy like salt. The Israelites had never seen anything like it.

Soon the whole camp was talking and examining this curious stuff. What is it? What IS it? Since they had no name for “it,” they simply called it manna, which in Hebrew literally means “What is it?”

Moses called out above the noise of their enthusiasm, “It’s bread from heaven—from the LORD your God.” A murmur of surprise rippled through the crowd as Moses continued.

“God said you may gather as much manna as you need for your families—about three quarts for each person. But,” Moses warned, “don’t keep ANY leftovers! Eat all you have gathered. On the sixth day you must get enough for TWO days because God said there won’t be any manna on the seventh day.” Moses knew God was going to test the people to see if they would listen and follow His instructions.

Pause for thought: How did Moses know God was going to test the people? You can find the answer in Exodus 16:4. What do we call the seventh day? Turn in your Bible to Genesis 2:1-3 and read what God Himself did on the seventh day. What are we supposed to do on the Sabbath day? Is the answer found in Exodus 20:8-11, Deuteronomy 5:12-15, or both?

As the day grew hotter, the Israelites were shocked to see the tiny morsels literally melting away before their very eyes.

The whole camp set about gathering the bread from heaven, measuring the portions carefully until each family had its allotment. As the day grew hotter, the Israelites were shocked to see the tiny morsels literally melting away before their very eyes. It became obvious that this was no ordinary stuff. It required special handling in the cool of the day!

The next morning the people looked forward to sampling their first meal made from this miracle food. Suddenly there was a shriek from a woman dashing from her tent, holding her nose. And she wasn’t the only one. Sounds of revulsion reverberated here and there throughout the camp.

Those bold enough to investigate were greeted with an awful smell coming from the manna pots. Any who ventured close enough to peer inside were repulsed by the sight of a mass of short, fat, writhing, wriggling WORMS.

Any who ventured close enough to peer inside were repulsed by the sight of a mass of short, fat, writhing, wriggling WORMS.

“Ugh!” some cried in disgust, “You foolish people! Didn’t Moses tell you to gather only enough for the day? You weren’t supposed to keep any overnight!” When an angry Moses appeared, the Listeners quickly busied themselves gathering their portion of manna for the day as instructed, and the Doubters learned a gross, very stinky, highly memorable lesson that day.

Tomorrow is the Sabbath day, a day of rest. Bake and cook what you need today, and make enough for tomorrow as well.

Every morning was the same that week until the sixth day. Then Moses reminded them of God’s instructions: “Tomorrow is the Sabbath day, a day of rest. Bake and cook what you need today, and make enough for tomorrow as well.”

Who’s in for a surprise—again?

The Doubters who had not listened earlier in the week were a little worried. They remembered too well that awful smell and the sight of wriggling worms in the manna pots. So they decided to do just as they had done before, gathering only as much as they could eat for the day. “We’ll see who gets a disgusting surprise in the morning this time,” they thought smugly, and settled in for the night.

Sabbath morning dawned, and the Doubters scurried out of their tents, manna pots in hand, ready to gather their breakfast bread. They stopped in their tracks. The dew was gone and the ground was BARE! There were NO little round things to be gathered! No bread from heaven! “Oh, no!” they wailed. “What will we have to eat today?” In other tents they could hear people gathering together to eat the sweetsmelling and delicious food they had prepared the day before.

Israel learned to prepare for God’s day of rest

Turn in your Bible to Exodus 16:28-29 and read how God responded to these foolish Doubters: “How long do you refuse to keep My commandments and My laws? See! For the LORD has given you the Sabbath; therefore He gives you on the sixth day bread for two days. Let every man remain in his place; let no man go out of his place on the seventh day.”

Then the Bible says, “So the people rested on the seventh day” (verse 30).

Pause for thought: How long do you think God provided this heavenly bread for His chosen people? Check out verse 35 for the amazing answer.

What does the word manna mean?

How were the Listeners different than the Doubters?

What lesson was God teaching about the Sabbath?

Can you think of a man and a woman in the Old Testament who decided to do their own thing rather than listen to God’s instructions? (Hint: Their story is found in Genesis 3.) Can you think of any other examples throughout the Bible?

Do you see Listeners and Doubters at school or anywhere else? Can you tell who has listened and who hasn’t? How?

Why is it good to listen?

Select a title from the following and draw a picture or cartoon strip based on this Bible study:

God is particular about how His Sabbath day is observed. He encourages His people to plan for it. The Israelites had to gather enough manna on Friday to last until Sunday, a lesson the Doubters learned the hard way.

As a family, make a list of things that need to be done to prepare for the Sabbath and include any specific instructions that are needed. Then make a chart or checklist that includes all the items on the list and post it on the refrigerator or another central place in the home. Let the children alternate each week in being the official “checker,” the one who checks off each item on the list with either L (for a Listener who followed directions) or D (for Doubters who might need to read the directions a little more closely). Decide on a group reward (like an extra scoop of ice cream after Friday night dinner) when there are all Ls on the chart.

Lessons We Learn From Their Lives

The examples of individuals recorded in the pages of the Bible can teach us valuable lessons about life. God often worked with ordinary people to accomplish extraordinary things. Learn how our biographical studies are organized and get tips on how Read More > 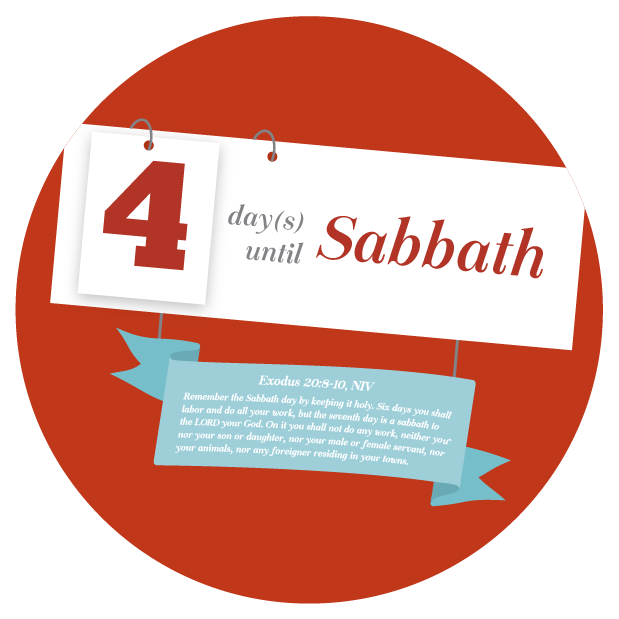 This wonderfully creative teaching tool will help you and your family anticipate God’s gift of the Sabbath each week. Download our instructions to assemble it using poster board, paper clips and split rings (or book rings).  Read More >